Race 1 in the Stadium Super Trucks

Sheldon Creed has won Race 1 in the Stadium Super Trucks at Barbagallo Raceway, while Jake Kostecki was unharmed after a spectacular rollover.

Coming from 10th under the reverse grid format, the defending champion gradually picked off his competitors over the first seven laps, finally passing then-leader Bill Hynes through the short-circuit section.

Matt Brabham was credited with 10th after a late start due to his DeVilbiss truck throwing off its drive belt, completing only the final six laps.

Meanwhile, Jake Kostecki escaped injury after a shocking Lap 2 rollover, which was caused when he and Milburn touched over a jump.

“There’s nothing wrong with me,” Kostecki told Speedcafe.com.

“I’m just a bit disappointed with how the race turned out. It’s my first time in a truck so I was learning heaps and it just went sour.

“Because the jumps are straight away after Turn 1, the truck’s still loaded on the turn, and we went up the jump both loaded and sprung off into each other.

“I started spinning out and then someone else had nowhere else to go and just tagged me and finished off the roll.”

Despite the incident, the West Australian hopes to reappear for another qualifying session and race tomorrow, starting at 1015 and 1340 AWST. James Duckworth has secured pole for Round 3 after a sensational qualifying shootout between he and Craig Woods.

Duckworth and Woods ran first and second when the 20-minute session was halted not long before halfway for a beached Michael Rinkin.

The pair then went faster again as the margin narrowed to 0.042s, before Woods took over the lead by just over 0.001s with two minutes remaining.

Duckworth was not done, reclaiming the ascendancy by 0.03s in his RDA Brakes entry before making sure of matters with a practice record 1:05.28s effort just before the chequered flag.

“I could see the big screen and that Craig had green sectors (fastest), so I knew I would have to go faster,” Duckworth said.

“On the last I just went all out, flat-out where ever I could.”

Kel Treseder and West Australian Travis Sharpe will share the second row, while Reece Chapman and Round 2 winner Jaie Robson line up on row three. 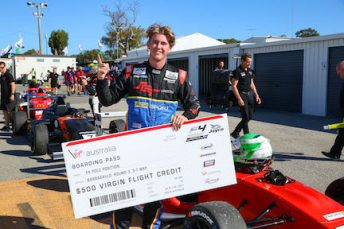 Nick Rowe has taken pole in his home round as locals topped all three Formula 4 sessions.

Championship leader Liam Lawson was third-fastest, while Aaron Love will start seventh after setting the fastest lap in a damp opening practice.