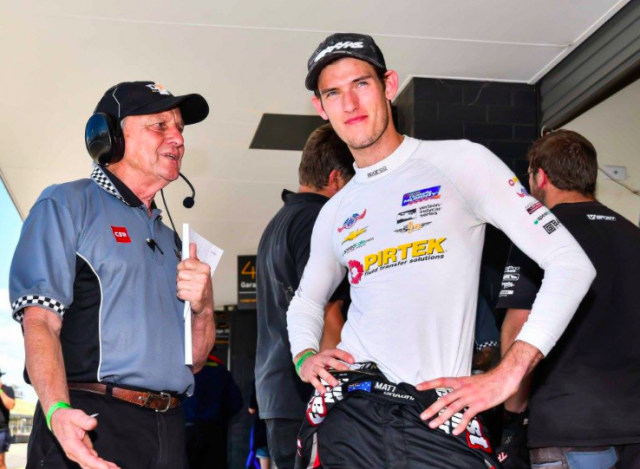 Former Bathurst 1000 winner Paul Morris is confident Matthew Brabham has the qualities to make a successful transition to Supercars ahead of his debut at Barbagallo Raceway.

Brabham will join the Virgin Australia Supercars Championship having secured a one-off drive in the #3 Lucas Dumbrell Motorsport Commodore as a last minute replacement for the unavailable Taz Douglas.

The 23-year-old is yet to experience a Supercar or Barbagallo Raceway, presenting the American-Australian with a tall order heading into this weekend’s Perth Super Sprint.

To help ease his transition, Brabham has enlisted Supercars veteran Morris to mentor him this weekend as he gets to grips with Australia’s holy contested premier series.

Brabham has spent the majority of his career racing single seaters having climbed the Road to Indy ladder in America, resulting in an Indy 500 drive for Pirtek Team Murray last year.

Morris admits acclimatising to Supercars machinery is not a swift process, but says Brabham has shown all the qualities to make the transition.

“He has been thrown in the deep end a fair bit with him not having a test day or anything,” Morris told Speedcafe.com.

“It is what it is and he has just got to try and use it as a learning experience and do all the laps.

“He has proven himself at the Indy 500 and when I’ve raced him in the Stadium Super Trucks he is pretty hard to beat.

“You can’t buy experience and we know it takes a lot of time to get up to speed in Supercar racing.

“Hopefully by Sunday he is on top of it and he can do something with it.

“It is going to be a fair bit different from what he is used to.

“He asked me for a hand and I’m more than happy to help him. I’ve known him since he was baby and I think he can do a good job. It is matter of accepting what it is and doing all the laps.”

Given the unique circumstances surrounding his Supercars debut, Morris says Brabham has nothing to prove this weekend.

“Realistically round here you can be six tenths off the pace and you could be last,” he added.

“I don’t expect him to be at the front of the grid but anything can happen in the races as it is so tyre dependent.

“If those guys get on a different strategy to everyone else and take a big risk there is no reason why he couldn’t win race.

“There are opportunities there to take as he has nothing to prove.

“Obviously he has got to take into consideration, and this is no disrespect to the team, but they are not a front running team.

“But without teams like Lucas Dumbrell Motorsport you won’t have young guys given opportunities to come into the sport. So hats off to those guys for giving Matt a crack.”

VIDEO: Brabham speaks about running in a Supercar in Perth