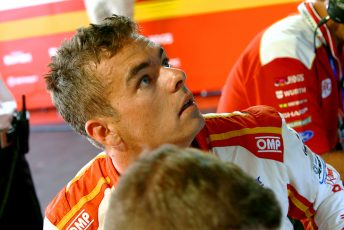 Scott McLaughlin says that warmer than usual temperatures will make for a greater physical and mental challenge at this weekend’s Perth Super Sprint.

Perth is forecast by the Bureau of Meteorology to hit a maximum temperature of 29 degrees on Sunday, a full 12 degrees hotter than the corresponding day of the Supercars calendar in 2016.

McLaughlin says that the rising mercury will physically tax drivers more so than in previous visits to Barbagallo Raceway, contributing to an overall mental challenge of managing tyre life on the notoriously abrasive circuit.

“It’s going to be a warm weekend in Perth, probably warmer than we normally have here, so it’s going to be tough on the body,” said the DJR Team Penske driver.

“(They’re) long races, especially on the Sunday – I think it’s going to be about 30 degrees – so it’s going to be warm in the car and adding to that is the mental strain because of trying to look after the tyres over a long run.

“Perth is genuinely going to be a lot harder than it has been in past years but I’m looking forward to it.

“We’ll have a pretty strong car I think and somewhere where I can hopefully maybe jag a win and try and get my championship back into a good form and a bit of momentum.”

McLaughlin is 97 points adrift of his leading Shell V-Power Racing team-mate Fabian Coulthard after the first three events of the 14-event season, with 150 points on offer for a win in any race except the Sandown 500 and Bathurst 1000 (300 points each).

The 23-year-old says that he plans to chip away at the advantage of those in front of him, with Shane van Gisbergen, Chaz Mostert, and Jamie Whincup filling second through fourth respectively.

“Fabian, my team-mate, is leading so it’s a good yardstick for me,” explained McLaughlin.

“I’ve got also Jamie Whincup, Chaz Mostert, and Shane ahead of me, and they’re all tough competitors so if I can take some sort of points off all those guys this weekend it would be ideal.

“To be honest I’m not too worried about the championship at this stage, I think there’s a lot more racing to come.

“Obviously I’d like to be a bit closer to the front but I think if we can just take a little bit of points of here and there and be somewhere there or thereabouts in the enduros, get through the enduros, and see where we’re at, we should be okay.

Practice 1 for the fourth event of the Virgin Australia Supercars Championship gets underway today at 1200 AWST (1400 AEST).