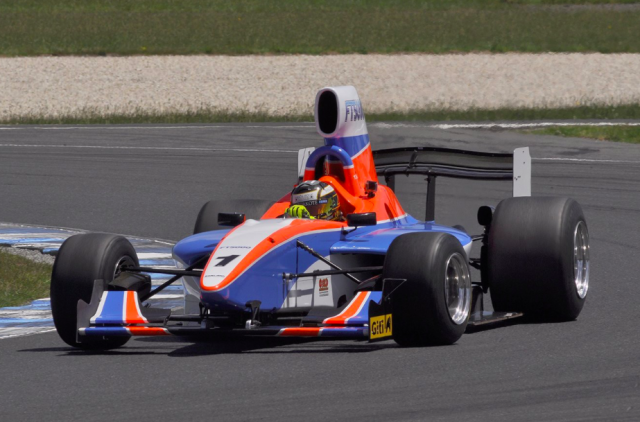 The Formula Thunder 5000 car has undergone extensive development and testing

Formula Thunder 5000 series boss Chris Lambden has criticised Supercars for its role in instigating the creation of a ‘copycat’ single seater which he believes threatens the existence of his new open wheel category.

Former racer and publisher Lambden has spent the last two years funding, creating and developing a bespoke Swift designed Formula 5000 car to be raced in a new summer series.

However, the new category now faces the possibility of a rival Formula 5000 series being formed instigated by Supercars, which the FT5000 boss has described as a ‘disgrace.’

The initial concept was tabled to the board and teams at Townsville last year, but the proposed series failed to receive support from the paddock.

However, Supercars has continued to develop a prototype car courtesy of private funding from NSW property developer/motorsport enthusiast Brian Boyd.

The car underwent a test at South Australia’s Mallala circuit earlier this year.

Supercars has however distanced itself from the project but the organisation retains the intellectual property of the car and the rights to run the series.

Lambden believes the possibility of two identical series will saturate the marketplace and threaten efforts to get his Formula Thunder 5000 series up and running.

A total of 12 car orders are required to make the series viable, but the possibility of a rival series is holding back potential customers.

“The conduct of Supercars staff in this matter is a disgrace,” said Lambden in a statement issued to Speedcafe.com.

“They proposed the copycat concept to the Supercars teams four months after the FT5000 car was publicly unveiled. Why? Because they can. Because they’re Supercars, with all the market dominance and power that implies.

“The teams, to their credit, actually turned down the proposal – some even suggesting they ought to talk to us – but the staff still wanted to go ahead.

“In our case, we’ve carefully researched, designed, built, and now successfully tested a car that has received tremendously positive reaction from motorsport people in general.

“It’s taken over two years, and considerable investment, along with technical input from some of Australia’s smartest motorsport people and companies. But now we’re faced with a copycat, which compromises everything.

“While this copycat project is a pain, there’s a hope it might, as a response, solidify support for what we’re doing – there are people out there not necessarily on the Supercars bandwagon.

“From the start, we’ve said we need a minimum of 12 confirmed cars worth of interested parties in order to hit the ‘go’ button – whether that’s owner-driver scenario, or individuals/companies taking on car ownership with a view to leasing car(s) to others – which we’ve has significant enquiry about.

“We’re not halfway yet, but there have been a number of people adopting a ‘wait and see’ approach to whom I’d suggest the time for ‘wait and see’ is over.

“If we can’t put the numbers together, then the unfortunate conclusion would have to be that there isn’t the appetite in Australia for a serious openwheeler series – and that would be a real shame, especially given the positive public reaction to FT5000.

“If we are to create a spectacular, cost-efficient and independent ‘big-banger’ open-wheeler spectacle, then the support of what I’d call real motorsport people is needed now – despite, and as a response to, this appalling copycat distraction.”

When contacted by Speedcafe.com, Supercars says its position on the rival series remains unchanged, referring to comments made by CEO James Warburton in a story published by Fairfax Media in March.

The article also claims that Lambden has been ‘offered an opportunity for dialogue.’

“We’ve allowed the backer and the designer to finish the project and then they’ll see if the interest is there,” CEO James Warburton told Fairfax Media.

“Everything else is people trying to stir trouble. It’s as simple as that.”