Cassidy on podium again in Super GT at Fuji

Cassidy on podium again in Super GT at Fuji 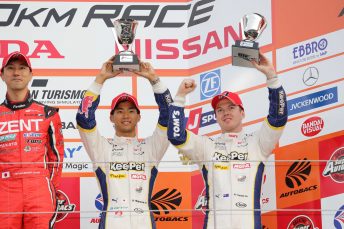 Nick Cassidy continues to lead Japan’s Super GT after he and co-driver Ryo Hirakawa finished third in the Fuji 500km race, Round 2 of the series.

Cassidy started the race in the #37 Team TOM Lexus LC 500, making up two positions from his starting berth to run fifth early on before battling tyre degradation.

Hirakawa made up another two positions during the middle stint of the race, helped in part by contact ahead between fellow Lexus drivers Daisuke Ito and Kohei Hirate.

Cassidy then brought the Round 1-winning car home for a second podium of the season, holding on to their championship lead by a single point.

“It’s an awesome result,” said the Kiwi. “We didn’t expect this having to carry 40 kgs of ballast after winning the first round last month.”

In GT300, Australian Jake Parsons and Shinnosuke Yamada finished 21st in class in their Audi R8.