Home » News » Supercars » BRABHAM: A Supercar is its own type of animal

BRABHAM: A Supercar is its own type of animal After my first day in a Supercar I can say that it is its own type of animal, but it’s a good animal.

I’m not really going to rate my overall performance because that’s not something I like to do, but all the team guys seem happy and everyone I talk to has told me I’ve been doing a good job.

I’m just having great fun and loving it so I’m just really grateful to Lucas Dumbrell, Phil Munday and the Repair Management Australia guys for sticking me in this weekend. It’s going to be awesome fun.

Overall, the day was great. Obviously, I’m a competitive person and I want to be up the front in every session and that’s what I aim for but at the same time I think it was a successful day.

I’ve accomplished what I wanted to do; just getting laps in my belt, keeping it clean, and getting some experience. What was surprising was how close I was in the first session, right off the bat. It was the first time I’d ever driven a Supercar in my life so it was going to be a huge learning curve and a big challenge.

I don’t think I’m far off and I was quite surprised how close I was but it just makes me hungrier to keep moving my way up the ladder and start jumping positions.

The number one word that comes to mind is ‘comfortable’. I thought it would be a lot edgier and unpredictable than it was.

However, it was quite predictable. Everything was unsurprising so getting on the power and braking into the corner was okay, and it was quite forgiving if you overstepped the limits.

Getting good laps under my belt was great, I’m right there, and obviously I just need to work on those last little bits to get on with all the boys.

I had an open mind going in but it definitely is quite a ‘point and shoot’ driving style and I was surprised how much it actually is like that.

In the last session, we were just doing race runs so I think that’s why we fell so far behind on the times – the first session was kind of more where we were at.

In the afternoon, I just wanted to get the driving style down and work on things, especially without the new tyre gain because it 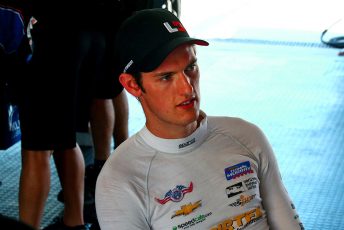 just had so much grip.

I want to be able to drive these cars when they start falling off and have tyre deg, which is going to be huge this weekend, so I was just running on old tyres and getting used to it. We have tyre deg in IndyCar but it’s nowhere near as drastic as what I’ve been feeling so far here.

As I said, Paul Morris has been great. It’s always good to have outside feedback and I need all the feedback I can get.

I’m willing to talk to anyone about it and all the guys in pit lane have been nice so far so I’ll just keep asking questions and learn as much as I can.

I’ve got a taste for sure and I know what it’s like now, so tonight I can think about it and go out tomorrow and see what we’ve got.