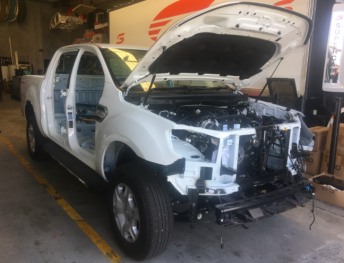 Supercars managing director Matt Braid explains the decision to delay the launch of the SuperUtes series.

Tabled to make its debut at the Townsville 400, a combination of delays in the development/homologation of prototypes, componentry supply issues and lack of confidence among competitors has forced Supercars to postpone the series until 2018.

As a result, the Ford/Holden V8 Utes platform will continue for another season, while Supercars with the help of former Supercars team owner Ross Stone, readies the Utes for next year.

Braid spoke to Speedcafe.com’s Tom Howard to explain the reasons behind the decision and the way forward for SuperUtes.

SPEEDCAFE: Firstly, can you explain why Supercars has reached the decision to delay SuperUtes until 2018?

MATT BRAID: “Ideally when we first developed the concept for the new category in the third quarter of last year, we did aim to have Townsville, we knew it would take some time, that’s why we put Townsville as being the ideal first race in the series from 2017.

What became apparent to us is probably on the development of the prototypes, the length of time they were taking on each of the kits. While we hoped the kits would be relatively simplistic at the end of the day, the development phase for those kits obviously is quite substantial, but particularly with the amount of different models involved and also the fact of getting access to those models.

We were working with competitors to get cars homologated and also some manufacturers directly and just not being able to get all those cars put through or lined up in the appropriate time to actually make our homologation window for Townsville, that’s one of the biggest things.

Why would we compromise ourselves and not be able to provide an appropriate, competitive field for the back end of the year?Even trying to do it – there was some feasibility of trying to do it further into the year – but realistically rather than trying to squeeze it in and not do it justice, we thought ‘Let’s regather, reinvest, put even more resources in it to do it right.’

From the competitors through to us through to the manufacturers and teams, everyone knows it’s going to be successful and we just want to do it right. We were worried that given the timeframe that we’re operating in and the delays we’ve had on some aspects, it was going to compromise it. A rendering of a proposed SuperUte

SPEEDCAFE: Is it fair to say that it was an ambitious target to be ready for Townsville?

BRAID: Hindsight’s always a wonderful thing but when we made that announcement we’d had some very positive conversations with both competitors, teams, and manufacturers, and I think just the fact that all those didn’t line up correctly past that point in time.

I think that was the disappointing factor. We couldn’t align it all in the timeframe we needed despite the positive conversations and undertakings that were going on from all parties, so on paper it looked like it was possible.

I think we knew even when we announced it was going to be challenging, but we were aiming for Townsville, but when all it takes in those situations is for one date in the project to be missed and it starts to set you back.

If anything we probably would have liked to announce this a little bit earlier but we wanted to announce it with a proper plan rather than just announce that we weren’t going to go ahead.

We did our homework and said ‘Okay, this is how we’re going to resource, plan, and put in place a structure and schedule for the rest of the year and into 2018.’

SPEEDCAFE: Was there any particular setback which forced Supercars to make this decision?

BRAID: Nothing specific, there’s so many moving parts in the whole category and as I said, I think when a couple of things have mistimings, then obviously it just sets everything back. We ideally would have liked to have had probably more opportunities to develop off the prototypes, or in one go.

But that was only one part of it, there were other parts, whether it be component supply issues, competitors dropping out, or coming in again, and just a bit of inconsistency all over the place, which didn’t give us confidence that we could really meet the timeframe.

To meet that Townsville timeframe, everything needed to line up and it just got to the point where a couple of things went awry and not one thing in particular, just a few things, but obviously once you miss opportunities on a couple of things, it compromises the project from a timing perspective. 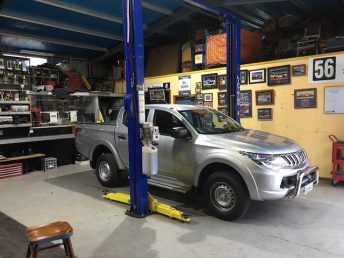 The Sieders Racing Team had been developing a Mitsubishi Triton

SPEEDCAFE: Given the fanfare of the launch last year is it a bit embarrassing that this has happened?

BRAID: Look absolutely, I would have loved to have seen them on the grid (at Townsville) with a full field, but equally too you don’t want to do that for the sake of it, so yes we did set ourselves an ambitious target.

We said at the time it was very ambitious and we said it was going to be a challenge, and it’s proven to be that and maybe a little bit more in some aspects.

With Supercars taking over a Utes category and obviously developing a new SuperUtes category, first and foremost we want to do it right, and that’s why it was never in doubt that once we realised it couldn’t be executed properly in time for Townsville, we had to change tack.

That’s why it’s seen us, if you like, hit the pause button from a point of view of the announcement.

In essence now by delaying it, we can actually ensure a proper developed field and utes for 2018.

SPEEDCAFE: Was a lack of leadership a factor in the decision?

BRAID: I think we’ve got some great people here at Supercars and we had some great assistance as well from our outside partners.

We never looked at it saying, ‘Oh, we can just do this ourselves and it’ll be easy,’ we always knew that we can’t do this alone and the structure of it as such. I think we’ve got good people who know what they’re doing, but also in the Supercar world there’s lots going on from a point of view of the various series we run.

Also given that the suppliers that we use are actually also in the motorsport industry, there’s always things going on which can potentially impact the rest of the businesses. So I wouldn’t say that, I think it’s more a case if anything of not being able to communicate enough information.

I think we had too many questions and not enough answers probably at the early stage of this and it’s probably where, from a competitor group point of view, certainly I think we want to make sure now that we can give them the confidence and give them the information that’s actually going to allow them to get themselves ready.

Having Ross Stone come onboard facilitates that better from a point of view that he’s actually very close to the competitor group, technically he’s going to be having some significant input as well – from a development and a testing point of view – so again that’s been a very welcome appointment which we’re very pleased to announce.

SPEEDCAFE: Moving forward how is the development of the SuperUtes prototypes progressing?

BRAID: We have four utes currently homologated and another two about to be completed, and when I say homologated we mean that they’ve been scanned, the various kit components have been designed, and then it’s a case of just waiting for the supply of those kit units and the build into prototype stage.

So we have two prototypes which will be completed we think by potentially Townsville or just after.

We will be showing various developments in the SuperUtes this year, but just actually having a competitive race on the circuit we won’t be able to do in ’17, but there’s four utes homologated and two more on the way.

We’re talking to another couple of manufacturers and/or teams who are bringing either dealer-backed or manufacturer-backed utes into the series this year and to be developed in ’17 for a start in ’18.

SPEEDCAFE: What are you targeting in terms of grid size for when the category launches next year?

BRAID: I think 20 plus Utes (is a full field), realistically. That’s the confidence thing for us, that we know that that’s there, so from a point of view of the brands that are represented, plus the competitors who run those utes, and run those models and brands, there’s ample scope for 20 plus entrants next year.

It’s just a case of making sure they’re developed, prepared, and obviously have their various race programs in line. 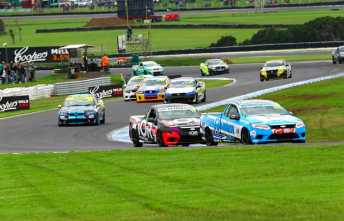 V8 Utes will contest a six round series this year

SPEEDCAFE: One of the criticisms from the prospective of the competitors was the lack of information about the category, are you confident that this has been addressed now?

BRAID: We haven’t been able to provide the right information earlier, we wanted to take our time and make sure that we’ve got a proper plan in place to be able to communicate that properly with the competitors and say, ‘This is the definitive way we’re going,’ whereas earlier on we weren’t able to do that.

I think that unfortunately prompted them to ask a probably more questions than what we could answer, and obviously when you do that, everything takes time and I think our view is that now we have got our ducks in a row, so to speak, we’re communicating that out, and giving everyone the knowledge and the confidence they need to be able to prepare their race programs and development programs for the back end of this year for 2018.

SPEEDCAFE: Have the costs to run a SuperUte changed?

BRAID: Certainly our target we announced last year of $60,000 for a kit, that is still on target, so that’s the pleasing thing, so that hasn’t moved.

Other than the development timing and the build time for entrants, everything else that we set out to do last year has been pretty much intact.

The way the kits are coming together, the cost of the kits, everything else regarding the structure of the category is unchanged from the original plan. It’s really just the fact that time has beaten us, so the timing’s been pushed out but everything else is actually on-track.

SPEEDCAFE: Are you confident the SuperUtes will strike a chord with the fans?

BRAID: I think so, certainly these utes will be entertaining and they’re going to be proper race kits, they aren’t going to be production. Everything that needs to be changed will be changed, from a safety and performance aspect, while maintaining manufacturer integrity of the car as well, because that’s important.