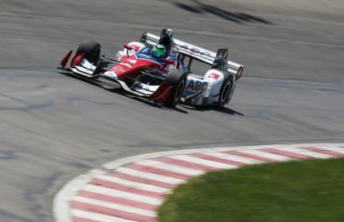 Castroneves was joined by his four Team Penske team-mates in the top seven, with Juan Pablo Montoya third-fastest as he prepares for his Indianapolis campaign.

Scott Dixon and Chip Ganassi Racing were the highest placed Honda in sixth.

The top 10 was rounded out by Carlos Muñoz, Tony Kanaan, and Ed Carpenter.

Carpenter’s team-mate JR Hildebrand was the only crash of the day, and while his ECR Chevrolet didn’t reappear due to damage, Hildebrand did not aggravate his broken hand.

The test got underway despite heavy rain in the two days prior, but was called to a close earlier than scheduled due to multiple cut tyres.

IndyCar returns to the Illinois speedway in August for its first race there since 2003.

The next round of the series is the Indianapolis Grand Prix on May 12-13.