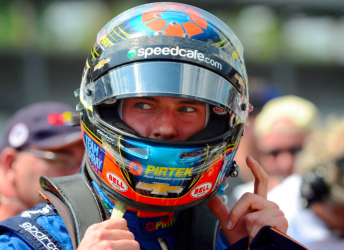 Matthew Brabham believes that his permanent circuit experience places him in good stead for this weekend’s round of the Stadium Super Trucks at Barbagallo Raceway.

The Stadium Super Trucks will race on a permanent circuit for the first time in support of the Perth SuperSprint, having originally started in stadiums and predominantly run on street circuits in recent years.

While Brabham has not been to Barbagallo before, he feels that his open-wheel background gives him an edge over much of the field.

“(Tuesday was) my first day at the track and I had no idea it had this much undulation in the track surface so I think it’s going to be a lot of fun,” the 23-year-old told Speedcafe.com.

“I should have a good advantage here because obviously my background is road racing; open-wheel racing and road courses.

“It should lean a little bit of an advantage to us road racing guys over the dirt track guys because this will be the first real road course that a Super Truck has ever raced on.”

Brabham arrives in Perth off the back of a win in the most recent round at Long Beach (April 7-9), which had the third-generation racer on a high.

“Long Beach was a good race for me, I ended up winning it (and) the round win overall,” he added.

“Dad (Geoff) has had a lot of history there and the atmosphere of that race is just awesome, so to finally get the round win this year was awesome.”

The Perth SuperSprint will be held from May 5-7.