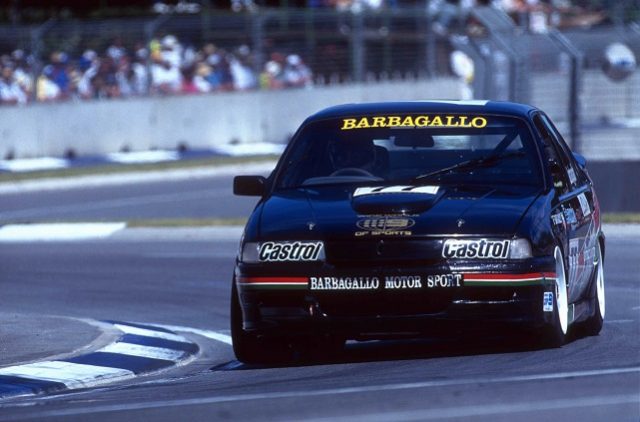 Alf Barbagallo at the 1992 Australian Grand Prix in Adelaide

This weekend the Virgin Australia Supercars Championship heads off to Western Australia to compete at Barbagallo Raceway in Perth.

Many race fans will remember that this circuit was originally known as Wanneroo Raceway, though changed its name in 1993 in deference to long-time WA motoring and motorsport identity Alf Barbagallo.

This weekend marks the 40th time the circuit has hosted the championship, having first hosted what was then called the Australian Touring Car Championship way back in 1973.

Since 1978 the venue has hosted the championship every year bar one (2010) and is a popular one with fans and drivers alike.

But considering we’re heading to Barbagallo Raceway this week, we thought it timely to dig out a shot of the man the circuit is named after for this week’s AN1 Images Memory Lane photo.

As many Speedcafe.com readers will remember, Barbagallo was a regular driving Commodores and teamed up with fellow West Aussie-based racer Tim Slako in a pair of pink/purple ‘Walkinshaw’ Commodores in the late 1980s.

In 1992 he acquired a brand new Commodore VN Group A constructed for him by Perkins Engineering – chassis PE 015 for the keen V8 Sleuth fans out there! – and it’s this car we’ve captured in today’s AN1 Images Memory Lane shot at the end-of-year Adelaide Grand Prix meeting.

Having raced the car in his local round of the touring car championship in June, Barbagallo was at the helm of the VN for the Australian Grand Prix meeting, which marked the farewell of Group A rules before the V8 rulebook came in full-time with Commodores and Falcons.

Note the Castrol backing on this car’s side and headlights and also the Nine Wide World of Sports logo on the bonnet – Nine of course was the telecaster of Formula 1 at the time.

Barbagallo finished 13th and 14th in the two races and continued racing his Commodore over the upcoming years, updated to VP and later VR specification.

His VN Commodore that is featured in today’s AN1 images Memory Lane lives on too; after a long life competing as a V8 Supercar in the hands of several privateers (Nathan Pretty included), it was eventually returned to VN Group A spec by current owner David Gardner and has appeared in the Heritage Touring Cars category for Historic Group A & C cars in recent years.