Neuville and the Hyundai WRC team celebrate in Argentina

Thierry Neuville has taken a narrow victory over Elfyn Evans at Rally Argentina after a dramatic final power stage of the event.

The final margin was just 0.7sec after four days of competition; one of the smallest margins in the World Rally Championship’s 45-year history.

The Hyundai i20 Coupe driver trailed Evans (M-Sport Ford) by 11.5sec heading into the last leg. Brake problems for Evans combined with Neuville’s attack sent the pair into the final 16.32km test at the famous El Condor separated by just 0.6sec.

Both drivers went flat out on the rough mountain tracks, and early split times showed Evans more than three seconds ahead. But as his grip lessened near the finish, his Ford Fiesta swiped a bridge and that handed Neuville a second consecutive WRC win.

“I cannot believe it. I have never had such a nerve-wracking final few minutes of a rally in my career. It’s an amazing result and I have to say thanks first of all to the team for everything they’ve done,” said Neuville.

“Congratulations also to Elfyn, who put up an incredible fight this weekend. I gave it absolutely everything I had in today’s final stages. After the difficult start to the rally, I would have been happy to take second but it’s a special feeling to win again.

“It has been an exciting but crazy rally from the start, so to come away with the victory is fantastic. We wanted to build up our momentum after Corsica and this was the perfect way to do just that.

“To have the Power Stage win is just the icing on the cake and gives us a very important boost in the Drivers’ and Manufacturers’ Championship. We could not have asked for more.”

Evans had starred on the event, extending a lead to more than a minute on the second full day of competition. However, despite his best efforts he came up just short. 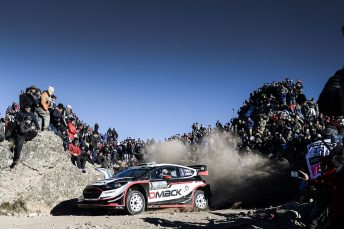 Evans was the star of the rally

“We’ve got mixed emotions at the end of this one. It’s obviously disappointing to have missed out on victory by such a fine margin but it was definitely a rally of two halves,” said Evans.

“Thierry had his own problems on Friday whilst we had a really good day and were able to establish a fairly reasonable lead. But it was a case of role reversal over the next two days.

“Thierry drove really well and no one can take that away from him, but we had a fair amount of problems – some self-inflicted and some not. To be honest, we didn’t have a clean run since the opening stage on Saturday morning so it was a big push to keep the battle so close.

“It’s a long story and I could probably write a list as long as my arm for why we didn’t manage to make it stick this weekend – but all credit to Thierry. He’s driven really well and from our side there are still a lot of positives that we can take away.

“When everything was working well, our speed was really strong. We just need to make sure that we learn from this weekend and come back stronger.”

Ott Tanak’s patient strategy paid off as he steered clear of trouble and thrived on the smoother weekend roads to finish third in another Fiesta, a further 29.2sec back.

Reigning champion Sebastien Ogier made it three M-Sport World Rally Team cars in the top four, and the Frenchman increased his championship lead to 16 points after five of 13 rounds.

Jari-Matti Latvala was Evans’ closest challenger early on but the Finn slipped back to finish fifth in his Toyota Yaris.

Broken power steering completed a torrid weekend for Hayden Paddon, who claimed his maiden win in Argentina 12 months ago. He was sixth. 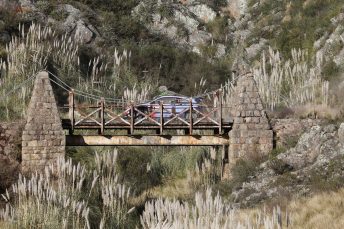 Argentina was not kind to Paddon

“You could not have written a script more opposite to what we had here last season. We’ve gone from a career high to a result that is much lower on the scale. I just can’t believe our luck,” said Paddon.

“Our issue on Friday was long behind us as we started to show some improved performance. There was not much we could do about our position but we wanted to build a rhythm.

“I didn’t have the feeling with the car in this morning’s stages, and that culminated with a power steering problem in the Power Stage. We struggled to the finish but sixth place is not where we want to be.”

Teams re-group for the Rally de Portugal, round six of the championship in Matosinhos, near Porto, on 18 – 21 May.