Logano wins on his 300th start

Logano wins on his 300th start 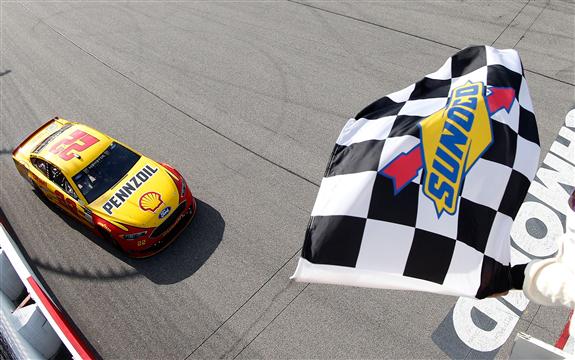 Joey Logano has celebrated his 300th start in the Monster Energy NASCAR Cup in style with victory at Richmond.

Logano had to do it the hard way after a gearbox change after practice forced him to start off the back.

On a great day for Team Penske, Brad Keselowski finished in second. This came after a late charge from Keselowski during a 19-lap green-flag run to the chequered flag.

Logano took the lead for the first time on Lap 384, after passing six cars on a restart that tried to hold-on with older tyres.

Keselowski had a faster car, having led 110 laps, but he also had more difficulty getting through traffic after the final restart, which proved the difference.

The result was the 26-year-old’s 18th career victory and first of the season.

“The boys had a great stop which gave us good track position to pass the cars that stayed out,” said Logano.

“We were able to have a good start, work our way past those cars and tried to take off the best I could.

“I knew the 2 (Keselowski) was so much faster than everybody and I had to get out there as quick and as far as I could.

“He was on his way to catch me. I think he was catching me a couple tenths a lap. That was all I had inside the car and I burned them up early trying to go.

“I am proud of the effort of the team. We executed under pressure today and brought a car home that was a 5th-10th place car home to victory lane.”

Stage 1 bonus points went the way of Matt Kenseth while Keselowski was in front at the conclusion of Stage 2.

It proved a difficult day for Hendrick Motorsports with the soon-to-be retired Dale Earnhardt Jr. and team-mate Jimmie Johnson making contact with each other.

Earnhardt, who had also then had a separate puncture and spin, finished 30th, while Johnson placed 11th.