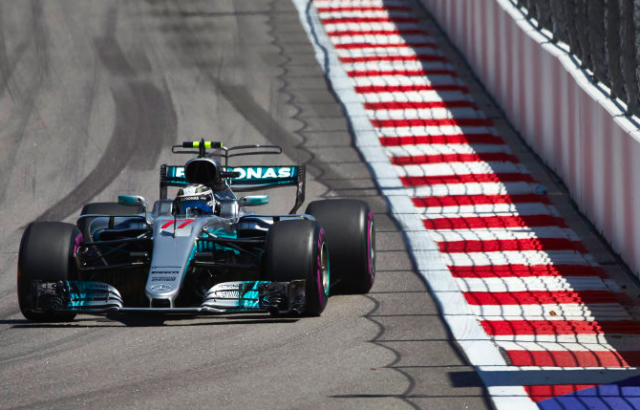 Valtteri Bottas held his nerve under immense pressure to see off a charging Sebastian Vettel to score his maiden Formula 1 race victory at the Russian Grand Prix.

The Mercedes driver controlled the majority of the encounter having jumped from third to first on the run to the first corner.

Bottas briefly lost the lead mid-race to the pole-sitting Ferrari of Vettel who elected to run a longer first stint in a bid to overcut the Finn.

The strategy provided a grandstand finish as Vettel, on fresher super-soft rubber, reeled in Bottas in the final laps.

Despite Vettel closing in, Bottas kept his cool to lead the four-time world champion to the chequered flag for a breakthrough win.

Vettel was left to rue having to navigate lapped traffic in final two laps.

Ferrari’s Kimi Raikkonen completed the podium in third while Lewis Hamilton struggled with overheating issues that restricted the Mercedes driver to fourth.

As a result, Vettel has opened up his championship lead over Hamilton to 13 points with Bottas 10 points further back in third.

Meanwhile, Red Bull’s Max Verstappen capitalised on a strong start to leap from seventh to fifth at the first at the corner, which he held throughout the 52 lap journey.

The result came after his crew had to fix a water leak on his RB13 prior to the race.

However, team-mate Daniel Ricciardo suffered his second retirement of the season when a rear brake issue forced him out of the race in the early laps while in seventh position.

Renault’s Nico Hulkenberg also elected to run a long stint, which helped him to eighth ahead of Williams’ Felipe Massa, who sacrificed a likely sixth place finish after incurring a slow puncture.

Toro Rosso’s Carlos Sainz rounded out the top 10 ahead of rookie Lance Stroll (Williams), who scored his first race finish in F1.

It proved to be yet another woeful raceday for McLaren with Fernando Alonso coming to a halt on the formation lap after an ERS issue. The situation prompted an aborted start.

The pair collided at the opening corner, following the start, resulting in damage on both cars.

The incident, which brought out the Safety Car, was set to be investigated by the stewards after the race.

Next Story Bottas: Maiden F1 win worth the wait