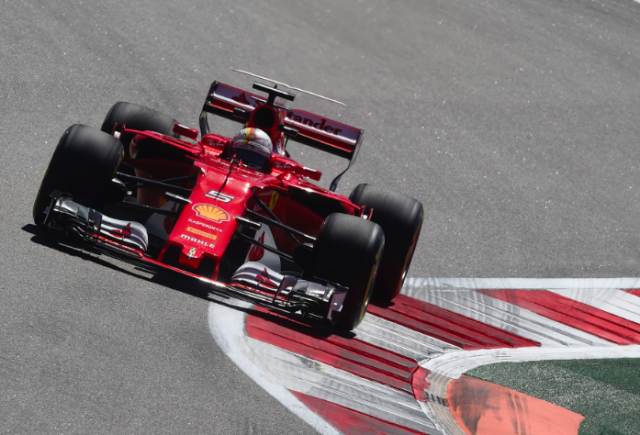 Sebastian Vettel emerged fastest in Friday practice as Ferrari asserted its authority ahead of the Russian Grand Prix.

The four-time world champion recorded the fastest time of the day with a 1:34.120s on the ultra-soft compound tyres, to top the second 90 minute practice at the Sochi Autodrom.

The Finn proved 0.2s shy of Vettel as Ferrari lit up the timing screens.

Lewis Hamilton was a tenth further back in fourth as the Silver Arrows failed to match Ferrari in the second and third sectors of the lap.

McLaren’s Fernando Alonso was able to clock a time good enough 12th on what was another difficult day for the Woking squad.

The sister car of Stoffel Vandoorne ended up 16th after missing much of the opening practice due to an engine issue.

McLaren has elected to change the Honda power unit which incurred a 15-place grid drop for the Belgian.

Rookie Lance Stroll was 19th for Williams having been the only driver not to compete a run on the ultra-soft tyres.

Countryman Sergey Sirotkin briefly appeared in opening practice for Renault as he took the wheel of Hulkenberg’s car.

The Renault reserve driver completed two installation laps before an issue sidelined the car for the remainder of the session.

Qualifying is scheduled to begin tonight at 2200 AEST.

Next Story Front-row lockout for Ferrari in Sochi