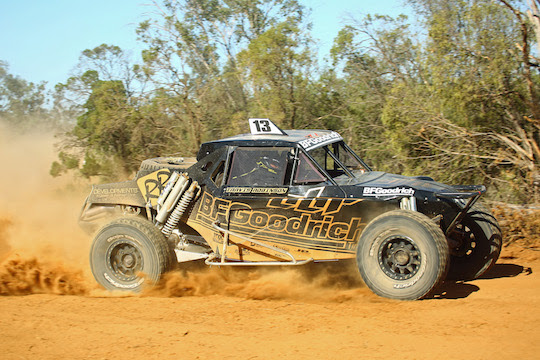 Travis Robinson leads the way at the end of day one at the St George 399, round one of the BFGoodrich CAMS Australian Off Road Championship.

Robinson and co-driver Trent Anthony had a trouble free run in the #13 BFGoodrich Jimco Nissan 3.5T, setting the fastest time in both the prologue and section one, which consisted of three laps of St George’s fast 35km course.

Robinson is using the St George event as preparation for the Finke Desert Race in June.

“We are just cruising around and getting some points on the board for Finke—Finke is our main aim so getting some seat time before then is the priority,” said Robinson.

“We will just continue to do what we are doing tomorrow, we have the car on low boost and we’ll do enough to get to the finish.

“The track is really good, it’s just when you catch the back markers that there is an issue; it’s really really dusty,” Robinson said.

“We’ve been here before, we just need to get to the finish, keep our heads level. We will look over the car tonight, the BFGoodrich’s are good, they don’t look like they have done many kilometres at all.”

Bryce Chapman and Mitch Warren trailed Robinson by more than two minutes at the end of section one, but did manage to come out ahead of today’s surprise packet, Toby Whateley, in his Can-am X3 900T, who posted the second fastest time in the prologue.

“I was really surprised to see a Can-am ahead of us after prologue—I thought ‘I need to dial this up a bit, I can’t be beaten by a UTV!’,” joked Chapman.

“We had a few issues, no brakes for the first couple of laps and we dropped a cylinder halfway through the third lap,” Chapman explained.

“The competition was good and we knew that we had to keep on the pace all day. We just have to fix the coil lead, give the car a quick spanner check and we’ll be back out there tomorrow.”

Tait Svenson and co-driver Chris Afoo climbed to third outright with a strong run in his German Autos Stealth 3.5L, but said that his day was far from perfect.

“It was good and bad—I snotted a tree slightly and had to grab reverse out. I also overshot in a few places,” Svenson said.

“We also had a pretty good run as we had a car drop out on front of us which helped with the dust.

“The course is good though, I enjoyed it, it’s challenging, and it keeps you on your toes.”

“We didn’t expect to be this high up—I thought the big straights would put us back a bit but obviously the tight stuff worked for us, these cars are really good in the tight stuff,” Whateley said.

“The course was very hard-packed, we got a bit sideways and just had to watch out for things at the side of the track that would jump out and bite you, it was pretty good.

“We did have a flat tyre today—we had to come in the pits and change it and lost three minutes.

“Being towards the front without the dust really helped. Hopefully we can be up there tomorrow as well.”

Things didn’t go to plan for Chris Mingay and Jay Graham this morning, the pair rolling their new Raptor TT during the prologue; Jeff McNivin and Andrew Reid also had a rollover in their JSW Power Sports Can-am X3. All were checked by medical staff at the track, with Graham being taken to St George Hospital for further medical checks.

The delays caused by the two rollovers during prologue meant today’s section was reduced from five laps to three laps; the decision was also made by organisers to split the field into two groups, reducing the number of vehicles on the course at one time and assisting to minimise the dust.