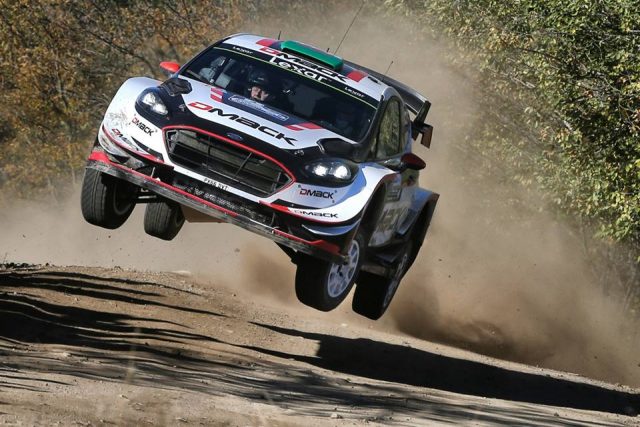 Elfyn Evans leads Rally Argentina after a bruising day in which both Hayden Paddon and Kris Meeke rolled amid trouble for several others.

Evans in an M-Sport Ford Fiesta heads customer team-mate Mads Ostberg, with Hyundai’s Thierry Neuville third after Day 2 of Round 5.

The Briton took the lead in Special Stage 2 out of San Augustin, his first of six stage wins in a row during a day in which the field ran through two identical, four-stage loops.

“It was pretty tough at times but we can be happy with today,” said Evans.

“We have to remember there’s a very long way to go tomorrow and Sunday is a tough day too.

“We have to carry on in the morning like today didn’t happen.”

Ostberg didn’t win a stage all day but runs second, 55.7s adrift, by virtue of being one of the few to have a relatively trouble-free run.

Neuville, on the other hand, suffered a broken front-right damper early in the day, a puncture in SS4, overheating in SS6, and dust in the cockpit during SS7, yet still sits third having won SS9.

Overnight leader Sebastien Ogier dropped to fourth over the course of the day’s eight stages after sliding into a ditch on SS2, damaging his M-Sport Fiesta’s aerodynamics, and later sustaining bent steering.

Jari-Matti Latvala’s Toyota Yaris was bottoming out during the opening stages, tearing off the front splitter, before the Finn was hamstrung by overheating at the start of the second loop and a puncture midway through on his way to sixth overall.

Paddon staged a remarkable recovery to currently run seventh after a soft rollover during the first stage of the day. 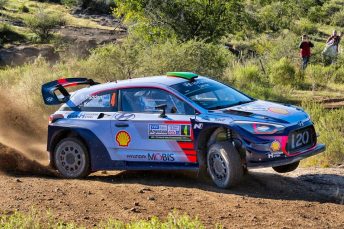 The New Zealander’s Hyundai i20 sustained minimal damage and he even won SS7 and SS8 (the former a tie with Evans) in the afternoon loop.

“Conditions have been very rough out there today. It’s a lot tougher this year, especially with the extra speed for the new cars.

“In the first stage of the day, we were caught out at a hairpin and the car rolled. It was very slow and thankfully we could get out and get it back over.

Factory Citroen drivers Kris Meeke and Craig Breen both retired after the former hit a bump and rolled, while the latter lost a gearbox.

Day 3 is the longest leg of Rally Argentina, 160km run over two loops.