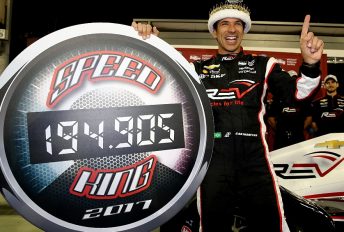 Helio Castroneves has taken pole position for the IndyCar Phoenix Grand Prix courtesy of one- and two-lap records at the one-mile oval.

Will Power was second-fastest as the four Team Penske Chevrolets all qualified in the top five.

The Brazilian also draws level with Bobby Unser on 49 career poles, third-highest of all time.

“I tell you man, that was great,” said Castroneves.

“Great team effort, the REV Chevy was really fast. I always say because of my teammates, these guys are the toughest ones, everybody’s pushing each other. But I’m really glad the No. 3 prevailed this time.”