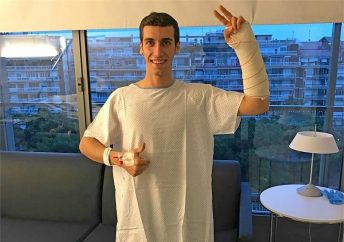 Suzuki has confirmed that the injured Alex Rins will be replaced by Japanese rider Takuya Tsuda for the MotoGP Spanish Grand Prix after overnight surgery.

Rins was operated on by MotoGP medical director Xavi Mir in Barcelona for fractures to his left wrist and both bones in his left forearm after crashing during Free Practice 3.

The Spaniard’s arm was stabilised in Texas on the day of the accident but he was not able to undergo surgery until five days later due to inflammation in the arm.

Neurological testing also revealed that Rins had suffered nerve damage in his left arm, which will be re-evaluated in a fortnight.

The 21-year-old MotoGP rookie is expected to be absent from racing for six to eight weeks.

“The surgery went very well according to what Dr Mir told me,” said Rins.

“I would like to thank him personally for all his care and attention since the fall in Austin last Saturday, him and all his team for care they have given me these days in hospital.”

The factory Suzuki squad has confirmed that its main test rider Tsuda will make his MotoGP debut as a stand-in for Rins at the Spanish Grand Prix (May 5-7) at Jerez.

The 32-year-old, who will also ride in the official test on the following day, finished runner-up in last year’s Japanese Superbike Championship.