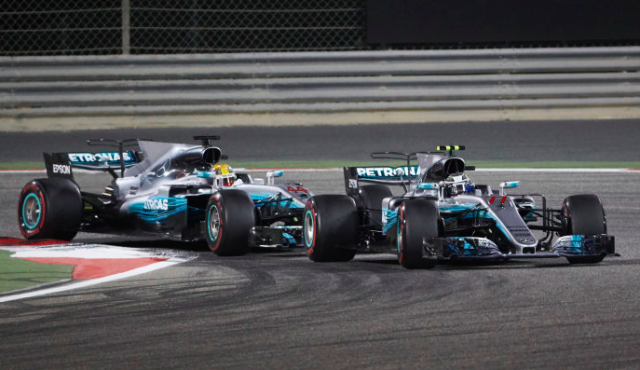 Mercedes drivers Lewis Hamilton and Valtteri Bottas are strongly opposed to the threat of team orders being introduced as the squad plans to take the championship fight to Ferrari.

Facing its most serious title challenge since the launch of the hybrid era in 2014, Mercedes boss Toto Wolff hinted that team orders may be enforced after the Bahrain Grand Prix to aid the team’s title hopes.

The move would present a distinct change to recent seasons having allowed its drivers to race freely, while electing against selecting a number one driver.

The matter was further highlighted when Hamilton was delayed by Bottas during the Bahrain Grand Prix.

Despite the growing threat from Ferrari, Hamilton says he is not a fan of team orders, which he feels should only be reserved for special circumstances.

“I do not (want them), and never have, and team orders has always been a very odd thing, and a difficult thing to judge – and something I’ve never particularly liked,” said Hamilton ahead of this weekend’s Russian Grand Prix.

“But it is in our rules, and our approach is that the team needs to win the race. We have to try and work as a team, but only in special circumstances.

“It’s difficult every single time but it’s definitely not a great thing to hear.

“I think you just have to assess in the moment, what your position is and whether you’re in a powerful position and when you’re actually contributing to the team’s result or you’re not. Then make the call.”

It is a view shared by team-mate Bottas who has revealed the team hasn’t discussed team orders since the Bahrain Grand Prix.

“We have not had the conversation because I don’t think there is any need to,” said Bottas.

“This team had never had number one or number two drivers and is not planning to.

“It is always trying to give an equal chance to both drivers, but the last three years the gap to the second quickest team has been bigger, so now every single detail can cost points.”

“If I have some issues in this race for whatever reason, a different strategy or Lewis is stuck behind me, then I will move over.

“I have always been a team player, but what is going to happen in the future between me and Lewis with team orders, we are not planning anything.”

Hamilton is lying second in the championship just seven points adrift of Ferrari’s Sebastian Vettel, while Bottas is third in the standings.

Next Story Vettel sets the pace in Russian GP practice