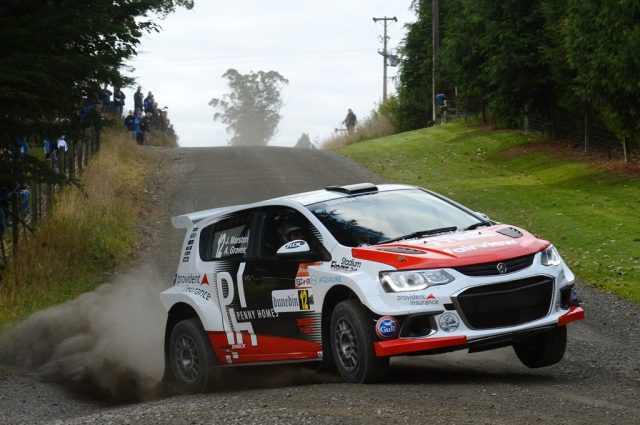 Greg Murphy is readying himself for a first New Zealand Rally Championship start for the Holden Barina RallySport team at this weekend’s International Rally of Whangarei.

Murphy missed the season-opening Rally of Otago (April 8-9) due to television commitments at the Tasmania Super Sprint.

Despite two short days of gravel road testing and a run at the Leadfoot Festival in February, the four-time Bathurst 1000 winner is excited at the prospect of a competitive debut in the AP4 class Barina after two years in the Classic 2WD division.

“It’s hard to believe what they are actually able to do and what you’re capable of doing in them; just the speed of the cars, the way they ride the road, the way that the tyres work, everything,” Murphy told Speedcafe.com of the new, purpose-built Barinas.

“We’re still coming to grips with it as a team as well just understanding it and then getting the best out of it so it’s going to take a little bit of time.

“But just driving it, it’s a proper race car – one that you drive on dirt – the full deal.

“It’s just so different for someone who’s spent so much time on tarmac. The thrill of it is amazing, it’s just incredible, I absolutely love it.”

The Northland region rally marks the first two-car event for the team after a frustrating campaign for Josh Marston in Otago.

Marston was sidelined on the opening day of the Dunedin event due to an engine issue, but believes that the team has resolved the issue with new spark plugs.

“We identified the problem which halted our debut in the Holden Barina at Otago and believe we are on top of it now with colder spark plugs,” said the Christchurch-based driver.

“We tested on Easter Monday and everything went well, then we won a rallysprint at Lake Kaniere.”

Running begins in Whangarei, 150km north of Auckland, with the Pohe Island Super Special Stage on the night of Friday 28 April.

Next Story White edges closer to Targa victory on Day 4