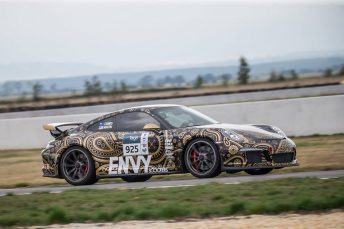 GT2 class competitor Barry Cuneo has escaped serious injury after a spectacular rollover near Burnie during Day 3 of the Targa Tasmania.

The car came to rest on its roof with the bootlid and spoiler hanging from a nearby tree branch.

Navigator Charles Martin walked away from the crash, which occurred on the day-ending Riana stage, but both were taken to hospital.

According to friend and outright contender Matt Close, who had to drive past the scene, Cuneo suffered only minor injuries.

“He’s under examination. He got a bump on the head and they’re keeping an eye on him.”

Jason White extended his lead to 60s on Day 3 of the Targa Tasmania.

Today’s fourth leg takes the field down from Burnie to Strahan, on the west coast.