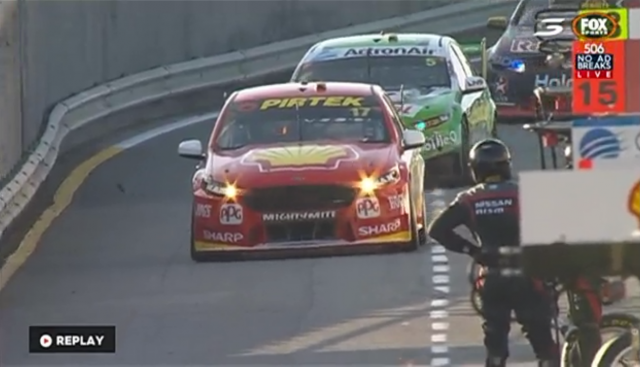 Mark Winterbottom called out the inconsistency in issuing penalties after an unprecedented spate of infringements for shortcutting the entry to pit lane at Phillip Island.

Winterbottom was one of eight drivers who was penalised for crossing into the slow lane while entering pit lane during Saturday’s Race 5, all of whom were either held for 15 seconds at their next pit stop or had the time added to their race time.

However, a number of other apparent shortcuts went unpunished, despite television footage showing cars crossing the broken line which delineates the fast lane from the working lane at the Victorian circuit.

Speaking on Fox Sports’ Inside Supercars program, Winterbottom also noted that some penalties appeared to be a reaction to the footage being broadcast, as opposed to those whose pit entries were not tracked by television cameras.

“The drama is that social media’s a big thing in our sport now and (on) Saturday night all the photos were coming in of the coverage (showing) Whincup did it, Caruso did it, Tander did it,” the Prodrive Racing Australia driver recalled.

“That’s the thing that gets you because if you’re on TV you get pinged, if you’re not on TV you don’t, and I don’t think that’s fair.

Winterbottom acknowledged that he had understood the pit entry procedure, which had only been issued to teams on the day of the race in question, and which several drivers expressed a level of confusion about.

Lowndes committed his offence at the same time as the initial clutch of pit stops but was issued his penalty much later, therefore  severely disadvantaged when the 15s was added to his race time in a race which ended under Safety Car.

Meanwhile, Winterbottom reflected on how heartened he was to join team-mate Chaz Mostert on the podium in Sunday’s Race 6 after an underwhelming start to the season.

The 2015 Supercars champion had not finished inside the top 10 in any points-paying race prior to Event 3 of the season at Phillip Island, and admitted that his barren run was ‘killing him deep down’.

After finishing eighth in Race 5 at the Victorian circuit, Winterbottom finished within three seconds of Mostert in second position, having run the same strategy as his team-mate.

The two races at the WD-40 Phillip Island 500 also marked the first two races this year for which the Bottle-O Falcon driver had out-qualified Mostert.

“The way he went (with set-up) is the way we were trying to go but it does make other areas of the car sensitive so when I had locking it was really exposing that front locking.

“Now that we’ve fixed the brakes, that was the path that we wanted to go. He’s done it two rounds earlier but we are very close now.

“It was good to out-qualify the cars (Mostert and fellow team-mate Cameron Waters) because they’ve given me a hiding.

“To see your team-mate on the front row or whatever and you’re 15th, that’s a big smack in the face, so it was good to get back up there and qualifying well.”