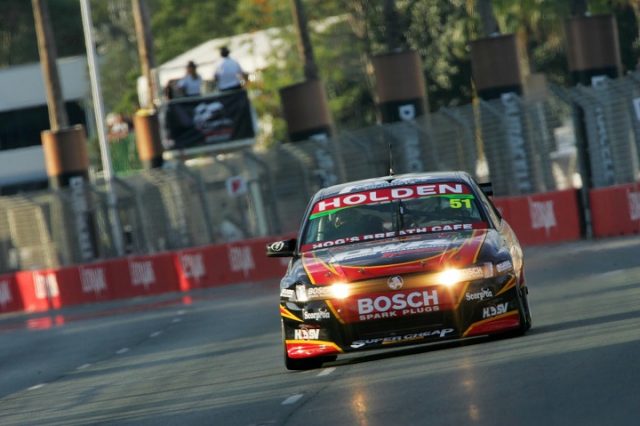 Chaz Mostert’s win last weekend at Phillip Island was the end of a Supercars Championship race winning drought for the 2014 Supercheap Auto Bathurst 1000 winner that dates back to August 2015 at Sydney Motorsport Park.

But, as our AN1 Images Memory Lane photo today shows, it also ended a drought for team sponsor Supercheap Auto in the Supercars Championship that dates back to Greg Murphy’s win in Race 1 of the 2005 round on the Gold Coast street circuit.

A quick count through the statistics files shows that 370 championship races had been held since this photo was taken in October ’05 before Mostert put Supercheap Auto Racing back in the race winner’s list on Sunday.

This particular shot is a great study of the #51 Commodore with the Kiwi great at the helm. Lights ablaze, Murphy is at full speed through the curved main ‘straight’ just after the start/finish line.

The first of three races was held on the Saturday afternoon and Murphy was dominant, only losing the lead for two laps of the race’s 31 during the compulsory pit stop cycle.

He led home Craig Lowndes (having his debut season with Triple Eight) in the #888 Betta Electrical Falcon by nearly four seconds, though we weren’t to know at the time that this would be Murphy’s 28th and very last Supercars Championship race win.

Lowndes won the two 22-lap races on the Sunday (remember this was back in the days of the longer, original Gold Coast ‘Indy’ street track layout) with Murphy second and third to end the weekend second overall on points.

His time with PWR Racing came to an end at the close of 2006 before he spent three years with Tasman Motorsport, a single year (2010) with Paul Morris Motorsports, two with Kelly Racing (2011-2012) and 2013 and 2014 as James Courtney’s endurance co-driver at the Holden Racing Team.