NASCAR’s most popular driver, Dale Earnhardt Jr., has confirmed that this season will be his last as a fulltime driver.

The announcement came via a media release from Hendrick Motorsports with a further media conference to be held later today.

Speculation about Earnhardt Jr.’s long-time future was brought into question after sitting out the second half (18 races) of the season with concussion related issues.

The news of Earnhardt Jr’s impending retirement comes on the back of Carl Edwards’ sudden decision to walk away from the sport at the end of last season; a year that also saw the closure of Tony Stewart’s career.

At the end of 2015 Jeff Gordon rounded-out his fulltime duties. He was put back into action as one of the replacement drivers for Earnhardt Jr. after he stepped away from the car last season.

Earnhardt Jr. has been in the spotlight for all his life as the son of a legend. He even drove for his father’s operation and had to deal with his death at the 2001 Dayton 500. His best season with Dale Earnhardt Incorporated (DEI) was 2004 when he won six times.

After leaving DEI at the end of 2007 he joined the powerful Hendrick Motorsports line-up which included Gordon and seven-time champion Jimmie Johnson. He joined the team to win a title; something that he has not been able to achieve. 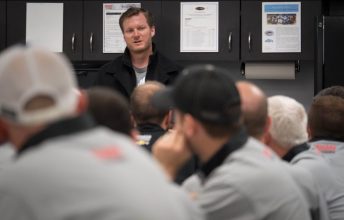 Earnhardt Jr. speaks to Hendrick staff about the decision

In 10 seasons with Hendrick Motorsports Earnhardt Jr. has had plenty of ups and downs. He even went four seasons without a victory.

However, there was plenty of highlights including seven wins in a two-year stretch, including the 2014 Daytona 500.

It was during the recovery process from his concussion issues that he took great interest in the effects of brain injuries on athletes. Even before the 2016 season, he confirmed that he would donate his brain for scientific research upon his passing.

Only after a test session at Darlington in December was he certified to return to the track. After the test he wed Amy Reimann in a New Year’s Eve ceremony and openly spoke about his priorities in life changing.

Speculation has already placed him into a broadcast role, something NASCAR is sure to encourage to keep the star associated with the sport.

HENDRICK MOTORSPORTS ANNOUNCEMENT
After 18 seasons and more than 600 races behind the wheel, Dale Earnhardt Jr. will bring his NASCAR Cup Series driving career to a close at the conclusion of 2017. Today, he shared the news with members of his No. 88 Hendrick Motorsports team.

The fan favorite and two-time Daytona 500 champion will discuss his decision in a press conference this afternoon. He will be joined by Hendrick Motorsports owner Rick Hendrick, for whom Earnhardt has driven since 2008. The two first met about the driver’s decision on March 29.

Earnhardt, who will turn 43 in October, made his first career Cup Series start on May 30, 1999, at Charlotte Motor Speedway. Since then, the Kannapolis, North Carolina, native has captured 26 points-paying Cup race wins and been voted by fans as NASCAR’s Most Popular Driver a record 14 consecutive years. He has qualified for the NASCAR playoffs eight times.

Now in the midst of his 18th full-time season at the elite Cup level, Earnhardt made his 600th career series start on March 26 at Fontana, California. He will compete in his final NASCAR Cup Series race on Nov. 19 at Homestead-Miami Speedway.

Hendrick Motorsports will announce plans for its 2018 team alignment at a later date.