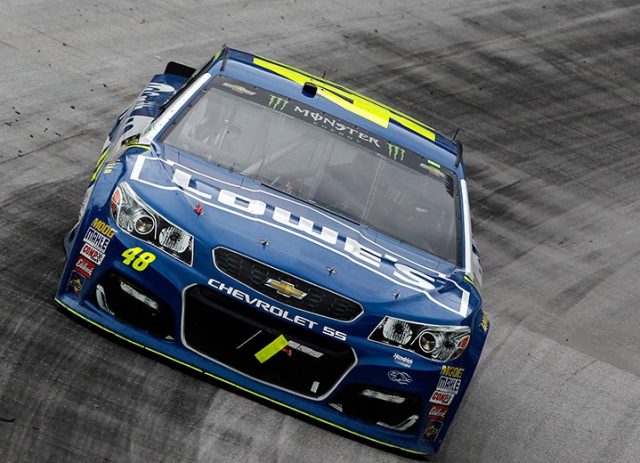 Jimmie Johnson has gone back-to-back in taking his 82nd NASCAR Cup victory in the Food City 500 at Bristol Motor Speedway.

Johnson started 11th after owners’ points set the grid due to a qualifying washout, dropping as low as 19th in the early stages before clawing his way to the pointy end of the field around the 100-lap mark.

The Hendrick Motorsports driver led for the first time upon the seventh restart with just over 100 laps to go, making side-by-side contact with Joey Logano on his way past.

He had to do it again after what would be the final restart with 31 laps to go, and would soon be chasing leader Kevin Harvick together with Kyle Larson.

Johnson made the final lead change on Lap 480 of 500, going on to win at Bristol for the second time.

“This track’s been difficult over the years and we really hit on something (on) Saturday afternoon,” explained the seven-time Cup champion.

“On that practice session we were on the bottom (lane) and honestly it’s what I’ve been looking for, for 16 years.

“I finally figured it out, so I’m very, very happy.”

Larson had led the first 202 laps but broke the speed limit during the eighth caution on Lap 423, putting the pole-sitter back to 17th before eventually finishing 6th and holding on to his points lead.

Stage 2 winner Martin Truex Jnr was also slapped with a speeding penalty, taking up 15th at the ninth and final restart, after which he climbed to eighth.

The next race is the Toyota Owners 400 at Richmond International Raceway on Monday May 1 (AEST).