POLL: Who impressed you the most at PI?

POLL: Who impressed you the most at PI?

Read through our shortlist of contenders below and cast your vote for the WD-40 Phillip Island 500’s most impressive driver in this week’s Pirtek Poll. 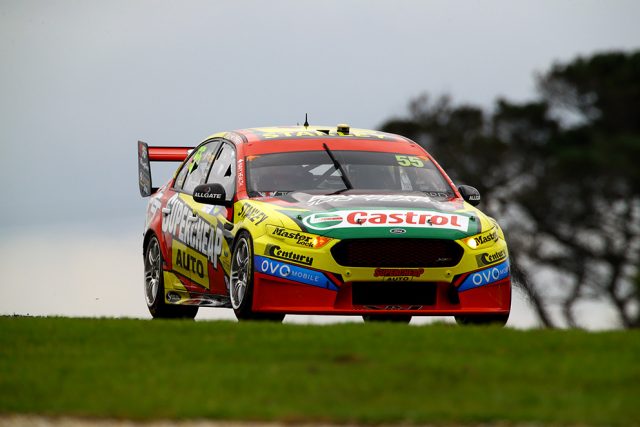 The Supercheap Auto Racing driver scored his first championship race win since Sydney Motorsport Park in August 2015 with a faultless drive to victory on Sunday, ending a 609 day drought.

Mostert showed pace throughout the weekend but fell foul of a tyre failure on Saturday, which promoted a car set-up overhaul to protect the rubber for Sunday’s race

A slick pit strategy matched by a change of driving style saw the 25-year-old lead his team-mate Mark Winterbottom to the chequered flag. 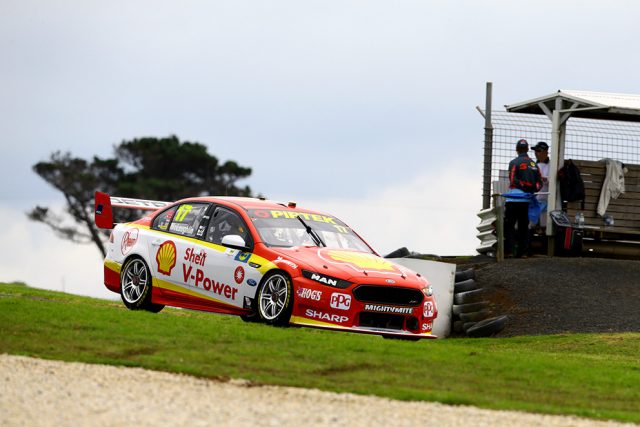 Scott McLaughlin once again confirmed he is a force to be reckoned with around Phillip Island, scoring back-to-back poles which saw him move to six in total at the circuit, one behind record-holder Jamie Whincup.

The Kiwi smashed the lap record while his effort in qualifying on Sunday would have been good enough to qualify inside the top 10 for the MotoGP Australian Grand Prix in 2015, when qualifying was held in similar dry conditions.

McLaughlin transferred his pace into the two 250km races, leading both heats.

However, a pit lane infringement dropped him to 10th on Saturday while a misjudgement on strategy saw him finish 14th on Sunday. 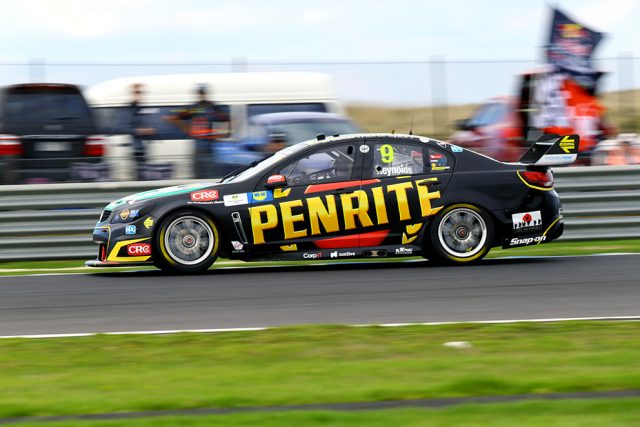 The Erebus Motorsport driver continued his strong from from Tasmania which was mirrored in qualifying and the races.

Reynolds was labelled the ‘Class B’ pole winner for his eighth in the opening qualifying session, behind the two DJRTP Falcons, two Triple Eight Commodores, and three PRA Falcons.

A spin following the melee at Turn 2 followed by a gearbox drama robbed him a chance to convert in Race 5.

He backed up his pace by storming to third in Race 6 with Reynolds matching the pace of the leading Prodrive Fords on Sunday. 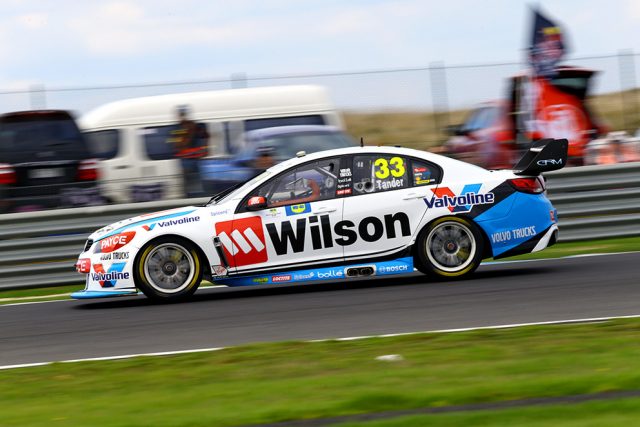 While Tander struggled for pace in qualifying trim, the 2007 Supercars showed off his racecraft by rising from 20th in both races to a pair of top 10 results.

His highlight was a drive to third in Saturday’s tyre failure strewn race which saw him genuinely contend for the race victory before being overhauled in the final laps.

Despite having to double stack behind his team-mate in Race 6, Tander came home in seventh and climbed to sixth in the championship standings. 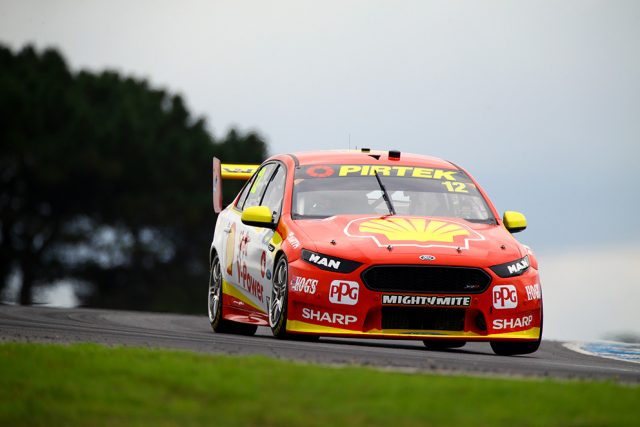 Fabian Coulthard assumed the lead of the Supercars Championship standings after scoring his second championship race win of the season in Race 5.

The Kiwi, who led the early laps, managed to fight back from a puncture to climb back through the field to take the win.

Coulthard led Race 6 although his bid for a double triumph unravelled when he ignored a red light at pit exit after his stop, which incurred a penalty, dropping him to 17th position. 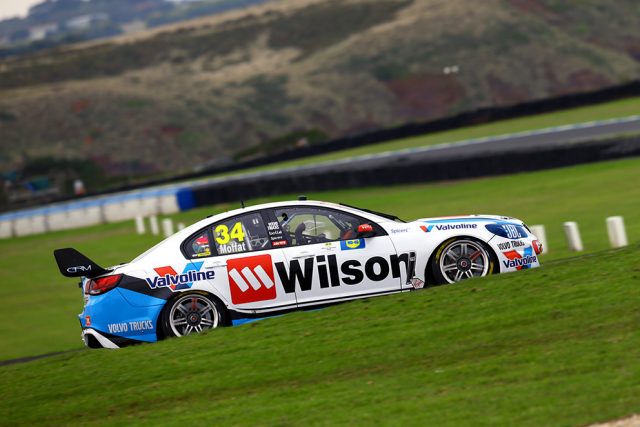 The Garry Rogers Motorsport driver scored a personal best result since joining the team last year by guiding his Commodore to fourth in Race 6.

Moffat managed to turn around a disappointing qualifying slot of 23rd with a slick drive through the field on Sunday.

The results arrived following a 14th place finish on Saturday after becoming one of many to suffer a tyre failure. 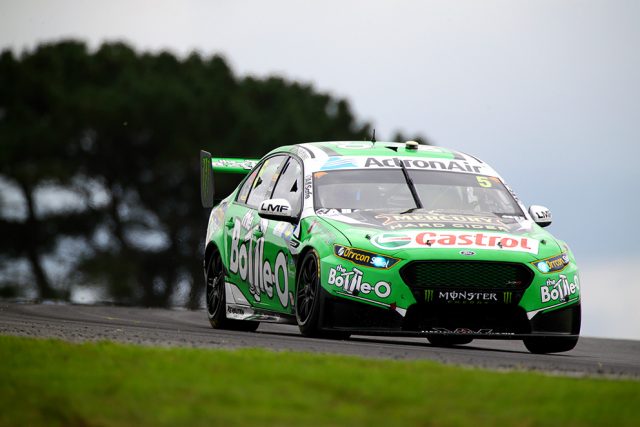 Winterbottom believed he was on course for a podium in Race 5 before being issued with a 15 second penalty for a pt lane infringement.

The #5 Falcon proved a force in qualifying, netting fourth in both sessions. 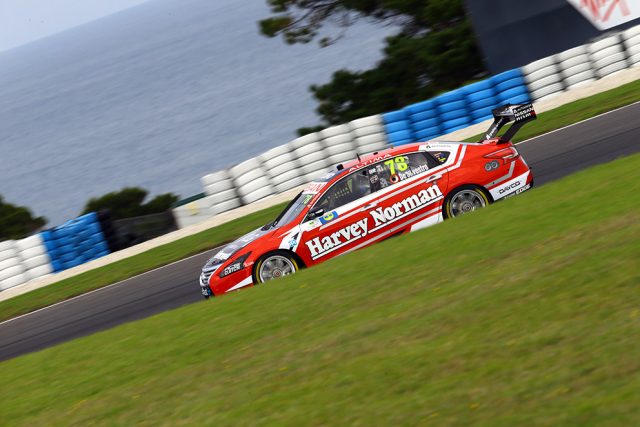 De Silvestro quickly adjusted to the demands of the track, out-qualifying more experienced drivers in both sessions.

The Nissan driver ran inside the top 10 during the chaotic Race 5 before eventually coming home in 13th position.

She repeated the personal best result with another solid drive in Race 6. 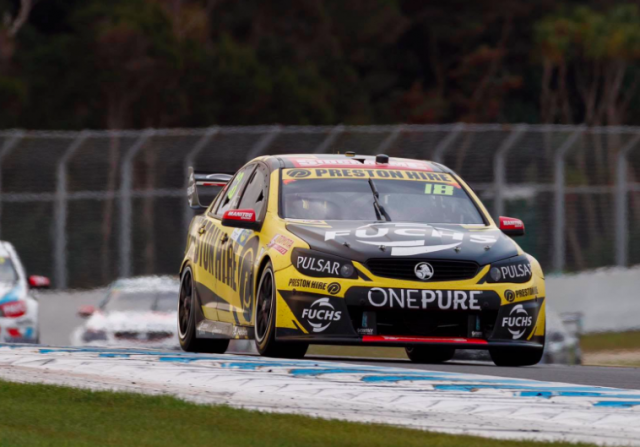 Holdsworth flew under the radar on Sunday as he executed smart strategy which helped him rise to fifth at the chequered flag.

His Saturday race was hampered by becoming involved in the opening lap melee at Turn 2 after running wide at the first corner.