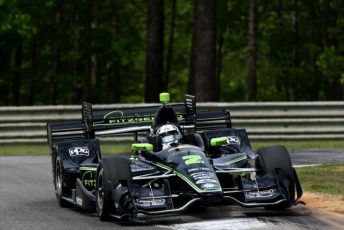 Josef Newgarden has won Round 3 of the IndyCar Series at Barber Motorsports Park after Will Power lost a likely victory due to a puncture.

Newgarden took his first win for Team Penske at the scene of his very first in IndyCar, two years ago, holding out Scott Dixon to give his team and Chevrolet their first wins of the season.

Power had dominated the race, officially leading 60 laps but effectively in control all the way until his Penske crew noticed a loss in pressure in a rear tyre with approximately 20 laps to go.

The Toowoomba driver initially attempted to persevere before relenting on Lap 77, dropping to 17th and ultimately finishing 14th.

“It was such a great effort all-round. The car was awesome, so fast, and I feel bad,” said Power, who has not finished in the top 10 in the last five races.

“It’s literally five races in a row – three of them were different mechanical issues – and I don’t know what to say.

“I could feel it starting to bottom and then starting to have issues in some fast corners, and I tried to tell them for as long as I could that it’s alright but I knew it was going down, you could feel it.

Newgarden had inherited fifth on the opening lap when Ryan Hunter-Reay and James Hinchcliffe came together, and ran either second or third from Lap 25 until the lead was handed to him as a result of his team-mate’s misfortune.

The 26-year-old had not long reclaimed second position from Dixon with an aggressive move through the final complex of corners just after the last restart on Lap 69.

Dixon, too, was a contender throughout, and the Chip Ganassi Honda driver looked like the only threat to the Penske juggernaut.

Despite holding a sizeable push-to-pass advantage for the final stint of the race, the Kiwi could not find a way back past Newgarden, and instead had to settle for his fifth runner-up finish at Barber.

On a mixed day for Team Penske, Simon Pagenaud and Helio Castroneves helped the team to a one-three-four finish at the front.

Sebastien Bourdais (Dayle Coyne Honda) finished eighth and continues to lead the championship, albeit with a reduced margin as Dixon and Newgarden closed in.

Power is mired in 14th in the title race ahead of Round 4 at Phoenix International Raceway from April 28-29.

Championship points: After Round 3