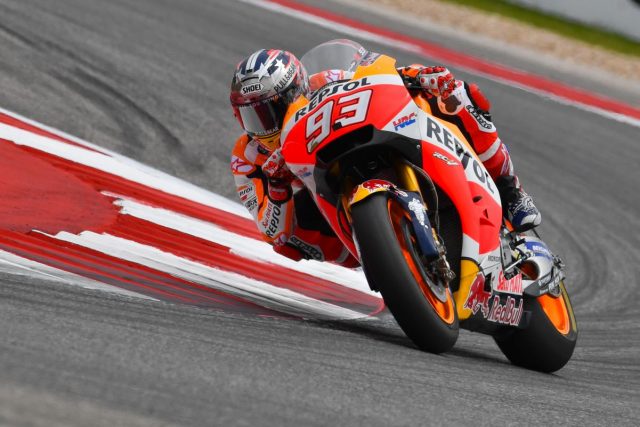 Marc Marquez has now won all five MotoGP races ever held at the Circuit of The Americas, while Maverick Viñales lost the world championship lead after an early crash.

His Movistar Yamaha team-mate Valentino Rossi has instead gained the ascendancy with another second place finish, with Dani Pedrosa making it a double podium for Repsol Honda.

Pedrosa swept around the outside to lead out of the first corner, ahead of Marquez, Rossi, and Viñales.

Viñales, however, did not make it past the second lap, drifting wide of the line at Turn 18 and going down.

The top four, now rounded out by Johann Zarco, ran in close company before Zarco tried to stick his Tech 3 Yamaha down the inside of Rossi through the slalom on Lap 7.

The two touched and Rossi was forced to shortcut the circuit, to which officials responded by issuing a 0.3s penalty for gaining an advantage, to be added to the Italian’s race time.

In front, Marquez successfully passed Pedrosa on Lap 9, having tried and failed to stick the move a lap earlier.

Pedrosa ran with bike #93 for the next handful of laps before Marquez put the hammer down on Lap 14, and disappeared for the seven laps thereafter.

Rossi meanwhile began threatening to take second place, and did so at Lap 19, at which time he still had not been told of the penalty hanging over him.

It mattered not as ‘The Doctor’ quickly pulled away to finish runner-up and consolidate his status as the only man to have finished on all three podiums thus far in 2017.

For Marquez, he is still undefeated on all North American circuits in the premier class, let alone the five races held in Texas.

“It was quite difficult race,” said Marquez.

“It looks easy but it was not, especially in the beginning because I choose the hard front tyre.

“I’m really happy because after Argentina it looks really far but now again we are there, we are really close,” he observed of the championship battle.

Pedrosa noted that he had been struggling with tyre life on his medium compound front but nevertheless picked up his first podium since winning in Misano in September 2016.

Andrea Iannone gradually climbed to seventh from 11th on the grid on his factory Suzuki, and Danilo Petrucci (Pramac Ducati) was eighth.

Jorge Lorenzo ran as high as fourth on the opening lap but gradually faded to ninth, still his best result so far for the factory Ducati team.

Jack Miller has three top 10 finishes from three to start 2017, having run eighth for the first half of the race before being passed by Iannone and Petrucci.

Both factory KTMs and both factory-supported Aprilias finished outside the points positions, which were rounded out by Aspar Ducati’s Alvaro Bautista despite a mid-race crash for the Spaniard.

Rossi leads the championship by two points, with his six nearest rivals all having recorded a DNF already.

MotoGP returns to Europe for Round 4 at Jerez, Spain from May 5-7.

Championship points: After Round 3