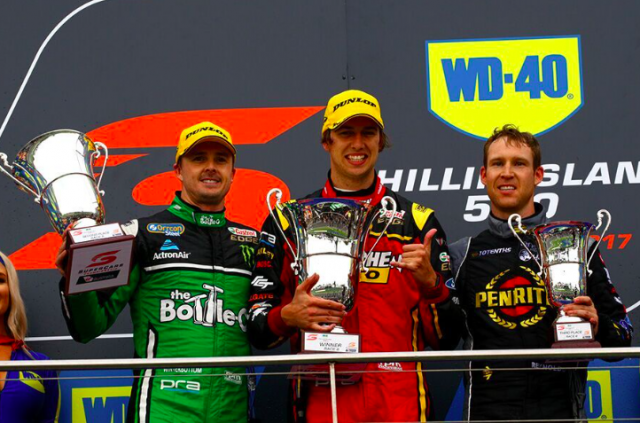 Prodrive Racing Australia boss Tim Edwards expects this year’s Supercars title fight to be wide open after witnessing his team notch up its first win of the season at Phillip Island.

The Ford squad flexed its championship credentials on Sunday with a one-two finish as Chaz Mostert produced a faultless drive to claim victory in Race 6 from team-mate Mark Winterbottom.

Prodrive, led by Mostert, had been threatening to break the Triple Eight/DJR Team Penske stranglehold on the season that has seen the two teams share the victories in the opening five races.

Mostert’s victory elevated the 25-year-old to third in the championship standings while also proving Prodrive remains a force in this year’s championship.

Becoming the third operation to taste victory this season, he expects other teams to come to the fore to add further intrigue to this year’s title race.

“It is great to get that first championship race win of the season but that is our expectation going into every race,” Edwards told Speedcafe.com.

“It is not like we are the underdog and are there to just pick up the scraps.

“We talk about it every single year how it is more competitive than the last and every year it appears to be. There is a long way to go in this season.

“I still think it’s anyones’ and there are plenty more teams out there that are just bubbling beneath the surface.

“It is not just going to be a three horse race, there are going to be other people getting on that top step of the podium.

“We will just worry about our own business and we don’t need to prove anything to anyone.”

Now only 37 points adrift of championship leader Fabian Coulthard, Mostert says he isn’t allowing himself to think about a championship tilt just yet.

“I think there is a long way to go,” said Mostert following his drought breaking win.

“We know we have to make a lot of gains with our car still, and that is solely the focus. Numbers in the championship don’t really mean so much right now, it is all about car speed.

“Probably the top five or six guys at the moment are pretty consistent, week-in and week-out, so to try and get on top of those guys we have to be faster.

“We will just keep working away. It is only the third round, there is a long way to go.”

The championship will reconvene at the Barbagallo Raceway for the Perth Super Sprint from May 5-7.