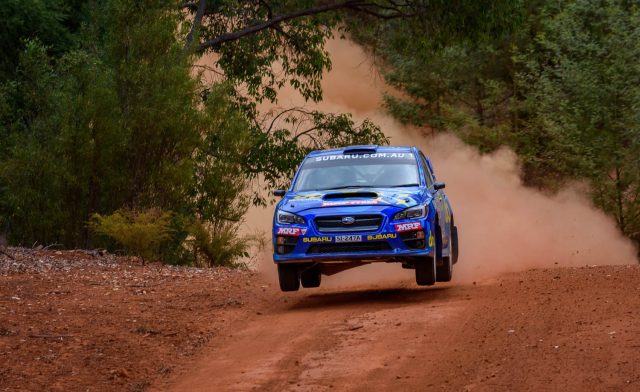 Molly Taylor has won the Make Smoking History Forest Rally in Western Australia with her second heat win in as many days.

Taylor and co-driver Bill Hayes thus climbed to second in the Australian Rally Championship, now led by Nathan Quinn, while Eli Evans followed up a challenging Saturday with a disastrous Sunday when he rolled multiple times on Special Stage 14.

Taylor was again a model of consistency, winning only two of the nine stages which comprised Sunday’s Heat 2, but leading after each of the final six stages.

The Subaru Impreza driver had claimed just a single stage on her way to taking out Heat 1, and was ecstatic at winning the Forest Rally for the first time.

“I’ve been chasing this victory for a while,” said Taylor.

“It’s my favourite rally, so I’ve always wanted to have this win and after a disappointing start in the first round to come back with this in Round 2 was more than we could hope for.”

Consistency was a theme for Quinn also, who leads the championship after finishing second in each of the opening two rounds.

The Coffs Harbour driver persevered with mechanical issues in his Mitsubishi Evo through both heats, climbing up the order through the final day and winning the last two stages of the rally.

Evans’ day was ruined when he ran off the road in his ironically-sponsored Tankformers Puegot 208, caught a ditch, and crashed into a water tank, rolling several times.

The three-time Forest Rally winner suspected that a flat tyre as a result of contact with a rock was to blame.

“The car didn’t turn in as much as I liked and we ran a bit wide, nudged a bank which brought the front straight and we hit a concrete water tank of all things,” he explained.

“It sent the car sideways through the air and it rolled three times and we landed.

Evans, who had won the first two stages of the day and still led through SS13 before the crash, nevertheless managed to effect repairs sufficient to resume at the final control and salvage some championship points.

Round 1 winner Harry Bates did likewise after a mechanical issue stopped his Toyota Corolla on SS17, having won two stages earlier in the day.

Round 3 is Canberra’s National Capital Rally, from May 26-28.