Ryal Harris has achieved a rare feat in sweeping the V8 Utes’ non-championship, penultimate round before it is set to be replaced by SuperUtes.

The three-time series champion got a kind grid inversion for Race 2, starting fifth.

He moved up to second position inside the first two laps before smashing the lap record by more than 0.5s on Lap 3.

Harris then overtook Kim Jane, who had led since the first corner, and while he couldn’t quite shake the veteran until the final lap, he always looked comfortable.

Harris faced a sterner challenge from team-mate Mason Barbera in Race 3, the pair engaging in some traditional V8 Utes argy-bargy.

Barbera twice took the lead but lost his right-front Yokohama tyre on the final lap and was not classified as a finisher.

The Commodore v Falcon era comes to a close at the Winton Super Sprint on May 19-21. 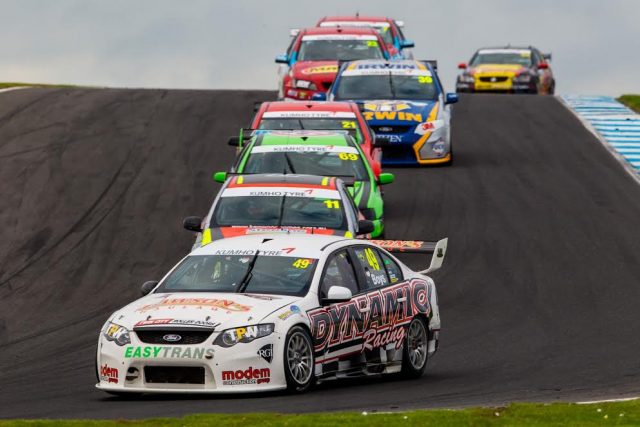 Jordan Boys won a race and the meeting after a topsy-turvy close to Round 1 of the Kumho Tyre Australian V8 Touring Car Series at Phillip Island.

Race 1 winner Tyler Greenbury was briefly headed after Geoff Emery won the start to Race 2, but the Eggleston Motorsport driver soon took over the lead and ran away to another victory.

The Queenslander was quicker away in Race 3 before Josh Smith took the lead on Lap 3.

Running second, Greenbury was still on for the round win before he swapped ends through Lukey Heights on Lap 9, dropping to eighth and handing the points lead to Smith.

Smith then joined the long list of those suffering tyre failures at the Island when his right-front Kumho gave way on Lap 11, handing the lead to debutant team-mate Jordan Boys.

He had also given the round lead back to Greenbury, but the Edge Commodore then also blew a right-front and had another detour at Lukey Heights.

Greenbury limped to the finish but was not classified after his final lap took nearly five minutes.

Round 2 supports the Winton Super Sprint on May 19-21. Jimmy Vernon and Warren Luff shared wins in a bruising day in the Toyota 86 Racing Series.

Luff won Race 3 under Safety Car after a 10-car pile-up took place at the Hairpin on Lap 2.

Ben Grice had spun after contact with Aaron Borg, the latter then riding up on the side of car #16 and onto two wheels. 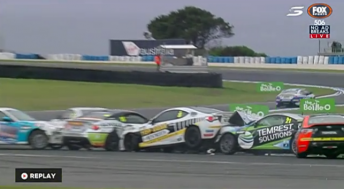 With the field still bunched tight and already compressing for the hard stop, several more cars became involved and the race drew to a time-certain finish.

The result made Luff the first invited driver to win a race in the series, which started last year, but second for Vernon gave the former Formula 4 driver the round win.

Vernon had won earlier in the day, having held out Luff and Damon Strongman at the end.