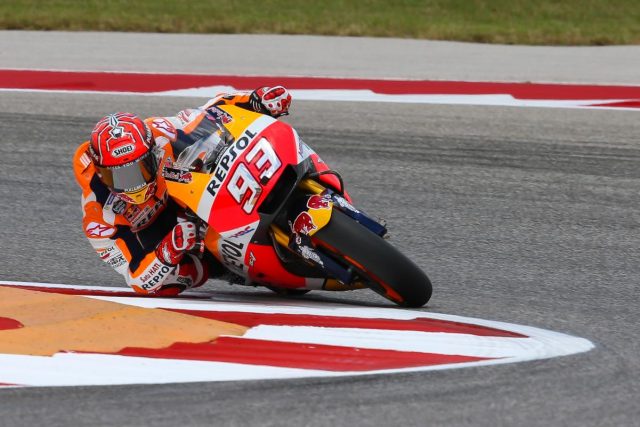 Marc Marquez has snatched a fifth straight pole position at the Grand Prix of The Americas despite the best efforts of Maverick Viñales.

The front row starters all set their respective fastest laps after the chequered flag, with Valentino Rossi making the top three after a controversial moment with team-mate Viñales earlier in Q2.

After Viñales had threatened to upstage the man who is undefeated in Texas, setting the pace in practice while Marquez crashed twice in FP3, the Repsol Honda rider nailed back-to-back fastest laps of the weekend to start qualifying.

Viñales, however, was held up on his first run when he came up on a slow-moving Rossi at Turn 19, and was seen remonstrating with his Movistar Yamaha team-mate when the pair started their second runs.

The championship leader was second by that point in time, but set the first 2:02s lap after the chequered flag flew as he threw down an almighty challenge to Marquez.

However, Marquez dug deep to beat his compatriot by 0.13s with an even later effort.

“Yesterday was not the best day for me,” said the Spaniard.

“I was struggling a little bit, I was not comfortable with the set-up of the bike.

“This morning we did a big change and FP3 was not the best for me because I crashed two times, but I still felt okay and this afternoon I just concentrated on the rhythm.”

“It’s something that did happen, it’s normal – there were many, many riders (on track)” said the 22-year-old.

“I was just angry because I was going on a hot lap, it’s normal. Riders get angry when you cannot finish your lap.”

Just metres in front of Marquez’s pole lap, Rossi had jumped from the third row to the first, his best grid position of the season after starts of 10th and seventh in the first two races.

“I saw Maverick say to me something but I did my lap so I don’t know,” explained the Italian.

“When the lap is very long you don’t have enough wait for any strategy, you have to go, so everybody is in the track at more or less at the same time.”

Dani Pedrosa (Repsol Honda) was bumped to fourth, Johann Zarco (Tech 3 Yamaha) was fifth, and Jorge Lorenzo (factory Ducati) will also start on the second row after coming through Q1.

Andrea Iannone (factory Suzuki) and Jack Miller (Marc VDS Honda) both crashed during Q2 on their way to 11th and 12th respectively, the latter having topped Q1.

Save of the day went to Loris Baz, who let Lorenzo off the hook in Q1 when he nearly crashed twice in one incident, somehow managing to stay on his Avintia Ducati at the final corner.

Suzuki’s Alex Rins’ weekend is over already after a crash during FP3 fractured the Spaniard’s wrist.

He wasn’t alone in going down during the session, with Aleix Espargaro also dropping his Gresini Aprilia twice as eight riders crashed 10 times between them.

The 21-lap Grand Prix of The Americas starts on Monday at 0500 AEST.

Next Story Marquez wins in America as Viñales crashes