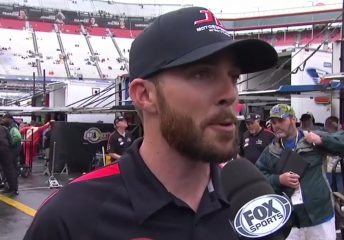 Ross Chastain punched Jeremy Clements in the face after an on-track stoush escalated in pit lane during a red flag at Bristol Motor Speedway.

The pair had made contact early in the race, Chastain the instigator, and Clements apparently took exception to the move.

When the race was suspended due to rain, Clements grabbed Chastain by the shoulder in pit lane, at which point the latter turned and punched Clements in the face.

“Somebody grabbed me by my shoulders and kind of pushed me,” Chastain told NASCAR on Fox.

“I just turned around and saw who it was. I hope he realises now that he can talk, we can talk, but you can’t grab someone by the shoulders.

“That happened before and I said right then I wouldn’t let it happen again. What’s done is done.”

Clements claimed that he did not intend to engage in physical conflict.

“I put my hand on his back and turned him around,’’ Clements told NBC Sports.

Both drivers finished the race when it resumed after a near two-hour stoppage.

NASCAR.com reports that Chastain considered the matter finished after the two discussed the matter following a meeting with NASCAR officials.

Erik Jones nudged Ryan Blaney out of the way to take victory.

See video below for Chastain’s interview and footage of the incident between he (#4) and Clements (#51).

Next Story Bristol Cup race postponed due to rain