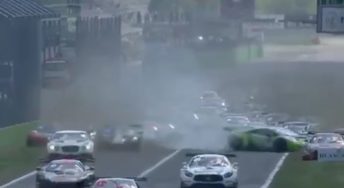 A bunched start has set-off a chain reaction crash with 16 cars involved in chaotic scenes at the opening round of the Blancpain GT Endurance Cup, the 3 Hours of Monza.

Bentley’s Guy Smith made light contact with the Lamborghini of Ezequiel Perez Compac with the Huracan spinning across the front of the field with cars diving left and right. He then went down the outside armco with the following cars crashing into the mess. Amongst them Nissan’s Lucas Ordonez trying to stay on the grass verge, but was soon in the middle of the crash scene.

The race was stopped while track crews collected the crashed cars and clean up the debris which littered the area before the first chicane.

Counting his lucky stars was the other Nissan of Struan Moore, who is sharing the GT-R with Australian Matt Simmons, chose to stay to the inside of the track and missed the wreck.

After a 15-minute delay the race was re-started with Miguel Molina Ferrari 488 GT3 ahead of Mirko Bortolotti, the team-mate of Perez Compac.

For his part, Smith was handed a 15-second pit lane penalty. Although after the re-start he took around 20 minutes to take the penalty as the M-Sport Bentley squad argued the point. Race officials upheld their decision and Smith came to pitlane. However, he didn’t stop for the 15-seconds and was excluded from the event and parked in the garage.

The Moore Nissan sitting in fourth 45-minutes into the race.

Crazy start at Monza. Sadly the No.23 of @Lucas_Ordonez has been caught up in it. Watch live at https://t.co/c3ZRviv12A. Safety car! pic.twitter.com/k76RAFobDc