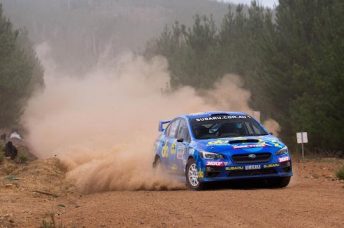 Molly Taylor has claimed a narrow victory in an enthralling Heat 1 of the Make Smoking History Forest Rally in Western Australia.

Taylor, overnight leader Eli Evans, Round 1 winner Harry Bates, and Nathan Quinn all won stages during the second day of running in Round 2 as the overall lead changed five times in as many stages.

The defending Australian Rally Champion took over the overall lead when she and co-driver Bill Hayes won Special Stage 4 in their Subaru Impreza.

Taylor lost the lead to Bates on SS5 and they continuously traded the advantage until she regained it for good on SS8 despite not winning another of the heat’s 10 stages.

“It definitely kept us on our toes for sure but it was one of the most enjoyable days rallying I’ve had in a long time just because we had that battle,” said Taylor.

“It wasn’t just a case of maintaining a lead or being stuck in a time where you can’t catch the person in front.

“To have the lead change all the time and you didn’t know what was going to be the outcome of the next stage forced us to really push as hard as we could and Harry (Bates) and the others were doing the same so it was a lot of fun.”

Just 3.1s separated the defending champion from the championship leader as Bates finished the heat in second place, extending his points margin.

The Toyota Corolla driver managed to win Special Stages 3 and 7 despite being first car on the road and thus sweeping the course for those behind.

“We were fully prepared for the challenge of being car one on the road, and it was challenging but we were really happy with our pace this morning despite that.

“At the end of the day we went out on a swept road (due to repeated routes) this afternoon and got beaten fair and square. Molly drove amazingly and she deserves it.”

Evans finished fourth after dumping more than 1:30s due to a MAP sensor issue in his Puegot 208 during the second forest stage (SS4).

That result saw him plummet from the overall lead to seventh, but another four stage wins in addition to the two he bagged in Busselton on Friday evening helped to make up some ground.

Marcus Walkem’s Forest Rally debut came to a sour end when he rolled his Mitsubishi Evo on SS7.

He was taken to hospital for precautionary reasons while co-driver Scott Walkem walked away.

The rally concludes with Heat 2 tomorrow.