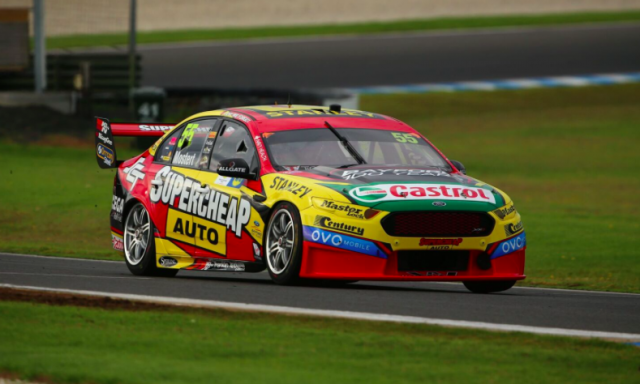 Chaz Mostert is confident changes to set-up will help eliminate the chances of him making costly driving errors.

The Supercheap Auto Racing driver let slip a victory opportunity at the Tyrepower Tasmania Super Sprint, when he surrendered the lead after locking his brakes towards the end of Race 4 at Symmons Plains.

Mostert has emerged as a threat once again to Triple Eight and DJR Team Penske at Phillip Island having topped Friday’s two 40 minute sessions, smashing the practice and qualifying lap record in the process.

The 24-year-old says he has put the error out of his mind after a run to second in the Hi-Tec Oils Bathurst 6 Hour last weekend prior to the WD-40 Phillip Island 500.

Mostert has revealed his team has worked on set-ups to make him more comfortable in the car, which he hopes will prevent a repeat of any similar braking issues.

“Obviously I was pretty annoyed with myself at Tasmania making that little error but I was pretty lucky that I had the Bathurst 6 Hour between this weekend and the last time I got out in one of these cars, so really the only memory I really have got is the second place finish in the 6 hour,” said Mostert.

“This weekend we’re trying some different things to fix those areas where I felt that the driver errors came in.

“There is a lot you can do with car set-up to make the driver feel a bit more comfortable.

“I had a bit of locking issues in Tasmania, so my engineer had a bit of a think about what we can do to help that.

“At the moment it feels pretty good but we’ll see what we can do in qualifying.

“The car feels pretty promising but I still think we can make some little gains in some areas.”

Mostert will return to the track for qualifying at 1245 AEST.

Next Story Lowndes set for return after lengthy rebuild