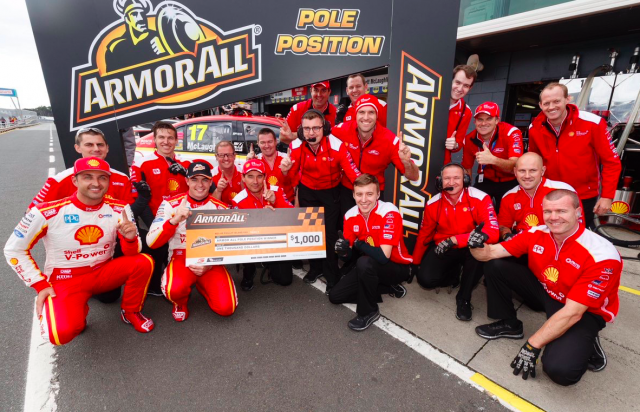 The Shell V Power Racing Falcons once again showed their growing strength as McLaughlin lowered the practice and qualifying record at the Victorian venue.

McLaughlin posted his session best on his third and final run, clocking a 1:29.36s effort, which proved to be 0.11s faster than his opposite number Coulthard.

It was the first pole position for DJR at the circuit since 1993.

“I love this place as much as the penguins, it is awesome,” said McLaughlin.

“The car was fantastic there and we just had a crack and it was fun.

“It is great for the team, Fabs is right there next to me, it will be a fun run to turn one and we will see how we go.”

He will share the second row with the #5 Prodrive Falcon of Mark Winterbottom, who is showing signs of a resurgence after two challenging meetings in Adelaide and Tasmania.

Team-mate Chaz Mostert was fifth while Cameron Waters put a third Prodrive Falcon inside the top 10 in seventh.

Rick Kelly emerged as the top Nissan in 11th position, while Craig Lowndes could only secure 15th spot in his rebuilt Triple Eight Commodore.

“We lacked a session to try and set-up for today, for this morning and we just struggled with the rear,” said Lowndes.

“The front of the car was brilliant, we can get it into corners, we can brake deep, just the high speed stuff we just can’t get it on or flow it off that last corner.

“We are losing some time there, off turn one as well, Hayshed is okay, a little loose over Lukey Heights.

“We made adjustments through those three runs but not enough to cure the problem.”

The injured Will Davison qualified in 17th in front of Simona de Silvestro, who will start from 23rd ahead of Tim Blanchard, Alex Rullo and Taz Douglas.