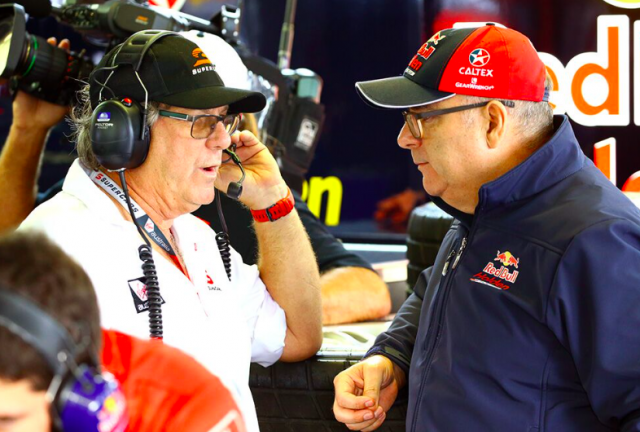 Triple Eight boss Roland Dane felt Craig Lowndes was shafted by the way a ‘stupid’ pit infringement penalty was delivered during a chaotic Race 5 at the WD-40 Phillip Island 500.

Lowndes was issued a 15 second penalty for crossing the line the designates the slow lane on the entry to the pits in the second half of the race.

The Triple Eight driver was among a group of eight, including team-mate Shane van Gisbergen, who were handed time penalties for crossing the line too early in pit-lane.

The team owner described the rule as ‘stupid’ but was left disappointed by the timing the stewards chose to issue Lowndes his penalty.

The infringement had been committed at the same time as van Gisbergen and Scott McLaughlin, who were issued their penalties earlier.

Lowndes crossed the finish line first in today’s race but the time penalty dropped him back to 12th position.

“We were given a penalty for something that happened on the same lap as the McLaughlin, Shane (van Gisbergen), Winterbottom issues, and yet we were given it half an hour after they were,” Dane told Speedcafe.com.

“So we had no chance to take that during a pit stop and then come back to it. We’ve been utterly, utterly shafted. Craig’s been shafted.

“The stupidity of the rule anyway, of enforcing so many, I mean how to shoot a business in the foot. It’s just madness.”

Prodrive boss Tim Edwards says the rules regarding pit lane entry were reiterated to teams via a bulletin prior to the start of the race.

“It’s there in black and white. Everybody got the bulletin before the race, but it’s one of those things,” Edwards told Speedcafe.com.

“The drivers just come in and they’ve never had to worry about that one metre of white line at the very beginning of pit lane where there’s no cars, might I add.

“It seems a trifle ridiculous, but anyway, it’s there in black and white so you need to cop it on the chin.”

Lowndes was equally disgruntled by the penalty post-race, describing the result as ‘gut-wrenching’.

“I want to see a replay to see if it’s true. I know I used the line, I don’t think I was over it.

“If it proves to be wrong, I’m going to be furious. To get that over the radio was pretty gut-wrenching.”

Van Gisbergen felt the stewards’ handling of the penalties was poor, claiming that it is likely the entire field would have made the error during the race.

The Kiwi managed to recover to fourth but has lost the championship lead to Race 5 winner Fabian Coulthard.

“The penalties being handed out were ridiculous,” said van Gisbergen.

“Crossing the line at pit entry is something that happens at every track, and the process is different on every track, yet now they decide to police it in a way they have never done here before.

“It’s pretty average if you ask me.

“They’ll need to re-watch the race and penalise everyone because otherwise they’ll only be selecting a handful.”

Six-time champion Jamie Whincup believes the rules regarding the entry of pit lane need to be made more clearer to drivers in future.

“I think it should have been clearer, without a doubt,” said Whincup.

“I am not sure if you can cross that line or if you can’t run more than four garages.

“I am not really sure of the rule, it hasn’t been discussed.”