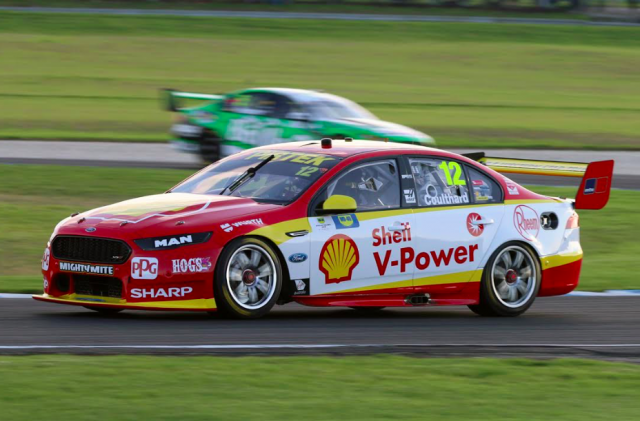 Fabian Coulthard emerged victorious from a chaotic Race 5 headlined by a series of tyre failures and penalties at the WD-40 Phillip Island 500.

The DJR Team Penske driver survived a tyre failure of his own to fight his way back through the field to to take the chequered flag in a race punctuated by three Safety Car periods.

It proved to be a race of attrition with approximately 17 tyre failures during the 250km heat, which forced teams to take drastic action, by making camber changes in the pits, to avoid further issues.

Coulthard, who led the early laps, actually crossed the finish line in second behind Craig Lowndes, but the latter had a 15 second time penalty for a pit lane infringement, which dropped him to 13th position.

“If I am honest, no, not really. We had a quick car, and the people we had to manage ourselves against were Scotty behind me and Frosty,” said Coulthard.

“I didn’t think for a second we would make it back to first, I thought maybe the podium was in reach.”

Tander appeared in the box seat to score a memorable win having taken advantage of earlier Safety Cars by pitting twice under caution.

The cautions were caused by tyre debris on circuit and a lap 38 clash between Cameron Waters and James Courtney.

He emerged in the lead as the race entered the final stages but he was unable to hold off a charging  Lowndes, Coulthard and Whincup.

Tander’s race was initially hampered by a Turn 1 incident including multiple cars on the opening lap.

He was awarded a 15 second penalty.

The Kiwi was penalised along with Lowndes, Simona De Silvestro, Scott McLaughlin, who had led the race at halfway, Chaz Mostert, Lee Holdsworth, Taz Douglas and Percat.

His team-mate Todd Kelly came home an impressive sixth after he hit a marshal post hard during a multiple car incident on the opening lap.

Jason Bright recovered from two punctures to cross the finish line in seventh ahead of the sister #5 Prodrive Falcon of Mark Winterbottom.

The injured Will Davison fought through pain and a pit lane penalty for turning around Tim Slade at MG to finish ninth while McLaughlin rounded out the top 10.

De Silvestro had ran as high as second in the race before dropping to 13th following the time penalty.

While the series of tyre failures created plenty of drama, there was action from the very start of the race with a multiple car crash at Doohan and the Southern Loop.

David Reynolds was edged out onto the grass and was followed by Holdsworth and Todd Kelly.

Reynolds came back onto the road at the Southern Loop before spinning his Holden.

Holdsworth came back on to the road and clattered into Brad Jones Racing’s Nick Percat and Garry Rogers Motorsport’s Garth Tander, forcing him off the road.

Stewards elected to investigate the incident after the race.

Coulthard has assumed the lead of the championship following his second win of the season.

Rullo, Percat, Reynolds (Gearbox) and Wood (suspension) all retired from the race.