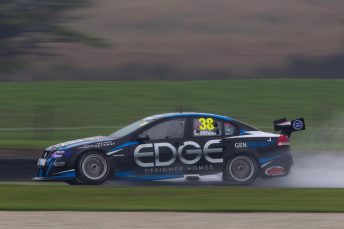 Tyler Greenbury has kicked off his Eggleston Motorsport tenure with the fastest lap in practice for Round 1 of the V8 Touring Car Series at a rainy Phillip Island.

Greenbury lapped the picturesque circuit in 1:34.52s late in the second session as the surface continued to dry after earlier showers.

Josh Smith was second quickest in his new home at Image Racing, becoming the only other driver to make the 1:34s bracket after the chequered flag.

Jack Smith finished the day in third as he performs double duty across Kumho V8s and the Dunlop Super2 Series.

The Brad Jones Racing Commodore driver was fastest in an opening session run in heavy rain, that effort over 22s slower than Greenbury’s best in Practice 2.

Geoff Emery sat out that session, but brought his ex-Craig Lowndes HDT tribute Commodore home in fourth in the second hit-out.

Jordan Boys, who had held top spot prior to Greenbury, was ultimately shuffled back to fifth.

Ben Grice was fastest in practice for the Toyota 86 Racing Series’ season-opener.

Grice clocked a 1:53.02s early in the second session, while Aaron Seton and Cameron Hill went second- and third-quickest midway through.

The reappearance of rain then curtailed hopes of any further advances on the timesheets.

However, it did cause a wild moment for Jason Bargwanna at the Hayshed, which the invited driver managed to catch.

The veteran finished the day 14th, while fellow invitee Warren Luff was ninth.

Barbera, who broke through for his maiden win in the category at the same circuit in 2016, missed Practice 1 before edging Marcus Zukanovic by just over 0.1s with a 1:50.36s in Practice 2.

The Bundaberg driver survived a scare midway through the session when he dropped a wheel off entering Gardner Straight, but managed to catch the IOR Petroleum Falcon.

Ryal Harris had a half-spin at MG on his way to third-fastest as the whole 11-car field set their respective personal bests in the more favourable conditions of Practice 2.