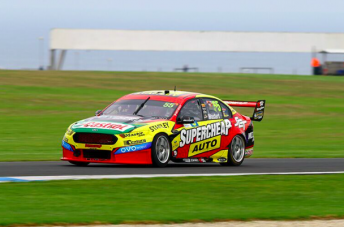 Chaz Mostert posted a blistering effort to emerge fastest in the second practice session at the WD-40 Phillip Island 500.

The Supercheap Auto Racing driver smashed the circuit practice and qualifying lap record by posting a 1:29.57s effort, which proved to be 0.2s quicker than nearest rival Shane van Gisbergen.

“The boys gave me a pretty awesome car out there, I still think there is a little bit more in it,” said Mostert.

“I need to find a bit more of a aero balance around here.

“(I am) shocked to be at the pointy end, I thought it was going to be really tight, but my car is feeling really good.”

The top eight cars all posted times under the existing lap record benchmark.

Van Gisbergen shot to the top of the times towards the end of the session after suffering a right front tyre failure midway through the hit-out.

The reigning champion had his tyre let go on the entry to Turn 1 but was able to nurse the car back to the pits.

DJR Team Penske’s Scott McLaughlin was third fastest in the #17 Falcon which was the last of three cars in the 1:29s bracket.

Fabian Coulthard (DJR Team Penske) had topped the times before sliding down to seventh in the closing stages.

Co-driver Tony D’Alberto jumped behind the wheel to cut laps as the session reached its climax.

Craig Lowndes was forced to sit out the session due to the damage incurred on his #888 TeamVortex Commodore following a high speed crash in opening practice.

“It does (put us behind for the weekend), it is one of those things where we will obviously rely heavily on the guys next door tomorrow as we go straight into qualifying,” said Lowndes.

“We will see what the weather does. The good thing is the front is going back together, but the rear has still got a lot of work to go.

“(There is a) lot of the fabrication sort of side of things (to do) on the back end, more tin work.”

Next Story Dunlop to conduct in-depth analysis after PI failures