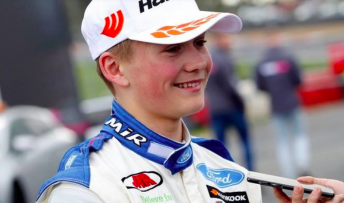 Motor racing stars and supporters from around the world have helped raise more than a million dollars for British Formula 4 driver Billy Monger who lost both his legs following an horrific crash at Donington Park.

Tekno Autosports Supercars driver Will Davison has also joined an array of motor racing identities who have donated to the cause.

Monger remains in hospital after undergoing an amputation of both his lower legs but has since been woken from an induced coma.

The British Touring Car Championship will run special stickers on its cars in support of Monger at the next round at Thruxton (May 6-7).

“In reality there is very little we can all do to help Billy, other than to show our great support for him,” said series boss and expat Australian Alan Gow.

“So, this message of support on our cars will be seen by literally millions of viewers around the world and hopefully may even bring a little smile to his face. Everyone is right behind you Billy!”