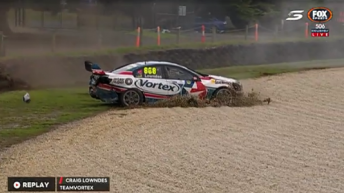 Craig Lowndes emerged unscathed from a high speed crash during opening practice at Phillip Island which left his Triple Eight team with a sizeable repair job.

The Triple Eight driver suffered a right front tyre failure which saw him spear hard into the barriers on the run to Lukey Heights.

Lowndes visited the circuit’s medical centre as a precaution before being released following a check up.

“I am okay. I think it is a bit disappointing, we were on our last lap as we knew the chequered flag was coming up but the front right tyre blew just as we were exiting the right hander out of the Hayshed,” said Lowndes.

“Of course you don’t want a front right going on a left hand corner, obviously became a bit of a passenger.

“With all the rain you get onto the grass and it becomes a ice skating rink.

“We actually skipped across the gravel trap pretty quick and then all that is left is the earth wall. We are okay, just have to see how the car is.

“It (the tyre) gave no warning, I went through Hayshed flat like we normally do and as we come out of the right and going transitioning to the left the front right just let go.

“As they are pulling it off now, the rails back to the firewall are all square.

“Everything that is tacked on at the front is all bent but the structure of the car is all intact.

“We would love to get the car out today, give it a shakedown and get things going ahead of tomorrow.”

Lowndes’ engineer John McGregor says the team will investigate exactly what occurred as they attempt to repair the #888 in time for Supercars Practice 2 at 1515 AEST.

“He knew straight away it was a front right tyre that has gone flat,” said McGregor.

“Until we get everything back it is hard to tell but from the telemetry it looks like the front right pressure dropped straight to zero, probably there was a puncture or delamination.

“We are not too sure at the moment but definitely front flat right is the issue, straight on.

“I just feel like the tyre has failed. I was following Michael and turned and it just decided it wanted to go straight ahead,” said Coulthard.

“It feels pretty clear to me what has happened, I have had two of these failures now, one at the Grand Prix and now this is my second one, hopefully there isn’t a third one in it.

“I was lucky I didn’t make the fence, Craig wasn’t as fortunate. the boys will put a new tyre on it and put a rag over it and hopefully it will be okay.”