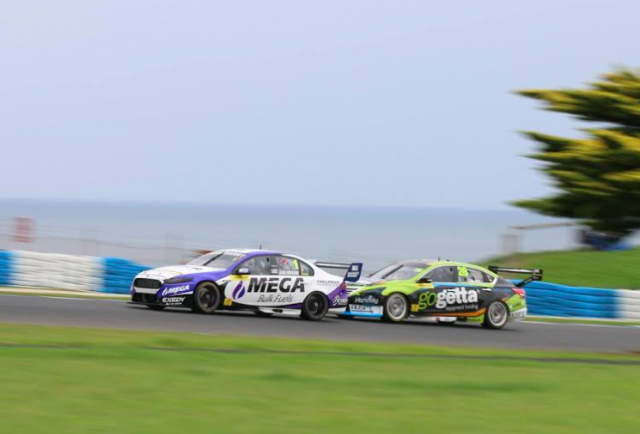 Garry Jacobson has taken his first race win of the year thanks to a final lap pass in Dunlop Super2 Series Race 1 at Phillip Island.

The defending champion made slight contact with Jack Le Brocq as he squeezed past at Stoner Corner, while Shae Davies joined his MW Motorsport team-mate in the minor placings.

Le Brocq led the field away from pole in drizzling rain while Davies made a strong start to leapfrog Davies into second.

Paul Dumbrell, on the other hand, dropped a couple of positions from fifth on the grid in the opening corners.

Le Brocq extended his lead to 2.5s over the next few laps before his former team-mate Jacobson, who had regained second at the Hairpin on Lap 1, began to reel him in.

The Prodrive driver was within striking distance when a reprieve came in the form of the Safety Car on Lap 10 after Matt Chahda slipped off and became bogged.

However, Le Brocq had to move his Go Getta Altima to the inside upon restart on Lap 12, coming under pressure from Jacobson as rain began falling again.

With the race set to finish a lap before its scheduled 16-lap distance, Jacobson put his #1 MEGA Falcon up the inside of car #28 on the final run through Stoner Corner, setting up his first win since Sandown in September 2016.

“Jack Le Brocq was pretty quick on the cold tyres but then I slowly just pegged him back, lap by lap” explained Jacobson.

“Then sprinkles of rain on the windscreen, I was trying to guess, ‘How far are you going to brake? I don’t know.’

“It was just a great race, great to be on top and great to give back to my family, my sponsors, and my team.

Nathan Morcom meanwhile climbed from rear of grid to finish 11th, having not appeared in Armor All Qualifying after a Practice crash.

Jack Perkins recorded a DNF, having pulled into the pits at the end of Lap 8 with his Dragon Commodore losing bulk time.

Kurt Kostecki also failed to finish after an error led to a clash with Bryce Fullwood on the final lap.

The Kosteckis were in the thick of the action early on when Jake ran off at the entry to Gardner Straight, Kurt ran off at the other end, and then Brodie Kostecki spun at Southern Loop as he was crimped by his cousin’s re-entry.

Race 2 will start tomorrow at 1120 AEST before Race 3 in the afternoon and Race 4 on Sunday.