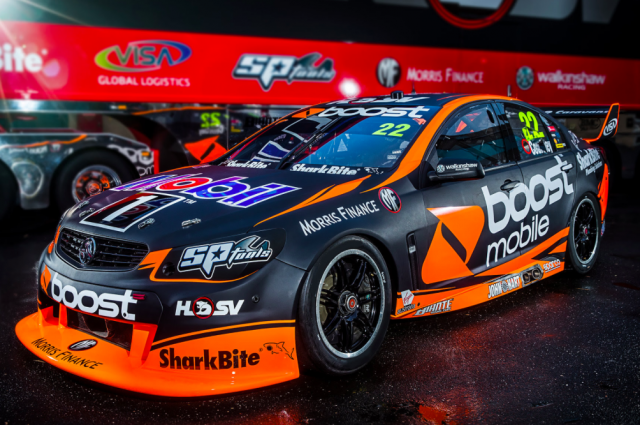 James Courtney will adopt a new look on his Mobil 1 HSV Racing Commodore heading into the WD-40 Phillip Island 500 and beyond.

The #22 Commodore will sport an orange and black colour scheme courtesy of Boost Mobile, who have become a major partner on the car for the remaining rounds of the Virgin Australia Supercars Championship.

Courtney’s car will feature prominent branding from Boost Mobile on the flanks of the Commodore.

The arrangement builds on a personal partnership between Courtney and Boost Mobile.

The 2010 Supercars champion has been forced to jump in the team’s spare car this weekend after his regular chassis suffered extensive damage during the 12-car pile up at the Tyrepower Tasmania Super Sprint.

“It’s fantastic to have Boost Mobile further the partnership they started with us at the beginning of the year,” said Mobil 1 HSV Racing boss Adrian Burgess.

“To have Boost Mobile as the major partner on car #22 for the rest of the season is extremely pleasing and exciting for us.

“We formed a great partnership when we started together at Clipsal, and it’s great that they see the value of being with the team, and with the category.

“They are a fantastic company that provide their customers with a great network, price and data packages. It’s a real pleasure to have them be a part of it on the track and in the garage.

“We think the car looks amazing, you certainly won’t miss it out there.”