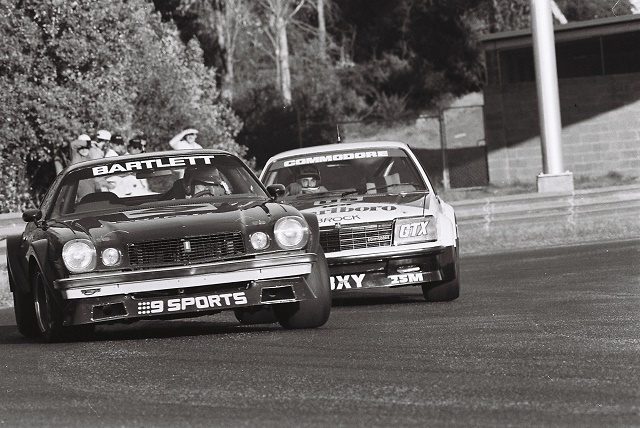 Kevin Bartlett and Peter Brock duel at Sandown in 1980

Our memory lane photo today, fresh from the AN1 Images archive, captures the final laps of one of the most hotly contested Australian Touring Car Championship races ever held.

The date was April 13 1980 at Sandown, hosting the fourth round of that year’s Australian Touring Car Championship over two heats.

In this great photo you can see Kevin Bartlett in the Channel 9 Chev Camaro leading the Marlboro Holden Dealer Team’s Peter Brock in his then-brand-new VB Commodore.

Brock was a firm favourite heading into the round having driven the new Commodore to victory in the three previous championship rounds at Symmons Plains, Calder and Lakeside, having taken over the team over the off-season.

Brock continued the VB’s unbeaten run at Sandown taking the first heat with little challenge. However in heat two Bartlett had other ideas.

The big Camaro lurched off the line to take a commanding lead heading into Turn 1. Brock followed along but lost more ground when Bartlett let the Camaro stretch its legs on Sandown’s long back straight.

Ever patient, Brock sat back in second for a number of laps, perhaps waiting for the Camaro’s legendary brake problems to surface once again and hand him victory. But it was not to be.

With five laps left to run Brock ran out of patience and dived the Commodore under the Camaro at the end of the front straight – but ran out of room.

He tried again on the penultimate lap. The parochial Sandown crowd roared its approval as the HDT Commodore appeared first from behind the pit straight to begin its run along the back straight.

Bartlett unleashed the Camaro’s superior horsepower to draw alongside Brock. The two cars exchanged the lead, and at times paint, in the tightly contested final lap.

Ultimately Bartlett took the chequered flag just 0.3s ahead of Brock. With the two driver’s tied on points for the day, as winner of the second heat, Bartlett was awarded the round win.

While many thought this win would breathe new life into the championship, Brock’s early season form had already laid the foundations for his 1980 touring car championship title, the third and surprisingly final of his career.

To purchase this photo or one just like it from our ever expanding archive of Australian motorsport photography, please click the banner below.