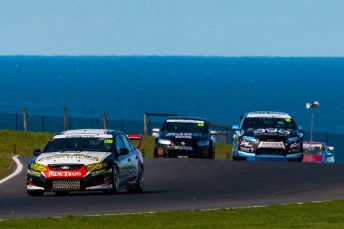 The Kumho V8 field at Phillip Island in 2016

The Kumho Tyre Australian V8 Touring Car Series has announced a 19-car grid for this weekend’s season-opener at Phillip Island.

Kumho V8s join the Dunlop Super2 Series on the supports bill for WD-40 Phillip Island 500, making for a total of 68 Supercars in competition at the Victorian circuit.

Geoff Emery returns to touring car racing in his ex-Craig Lowndes Triple Eight Commodore, which has been restored to the Holden Dealer Team tribute livery it ran at the 2012 Bathurst 1000.

Emery will even run the Commodore, last raced at Sydney Olympic Park in 2014, as car #888.

The Queensland is the only man in the field to have won a race in 2016, the other winners having been eventual series champion Taz Douglas and Super2 champion Garry Jacobson.

Ironically, Josh Smith’s seat at BJR will be filled by Jack Smith, who will be on double-duty at Phillip Island when he also runs in Super2.

Jack Smith will, however, switch that ride to the car which Jason Bright crashed at Adelaide in 2014 after writing off a VF Commodore in a multi-car crash at Symmons Plains.

Two-time Kumho V8 champions Eggleston Motorsport return with an as yet unconfirmed driver, believed to be 2016 runner-up Tyler Greenbury, in an ex-Triple Eight VE Commodore.

Michael Anderson is back after debuting in the series last season, but will now field the FG Falcon with which Cameron Waters won the 2015 Super2 Series.

Jacobson took the same car to five race wins in his two-round cameo in the unofficial third tier of Supercars last year.

In the Heritage class, Troy Stapleton’s ex-Dick Johnson Racing EL Falcon will be on the grid again, complete with original Shell Helix livery, while Bradley Neill debuts with an ex-Perkins Engineering-built VS Commodore raced by David ‘Truckie’ Parsons in 1996.

Round 1 supports the Virgin Australia Supercars Championship this weekend, April 21-23.