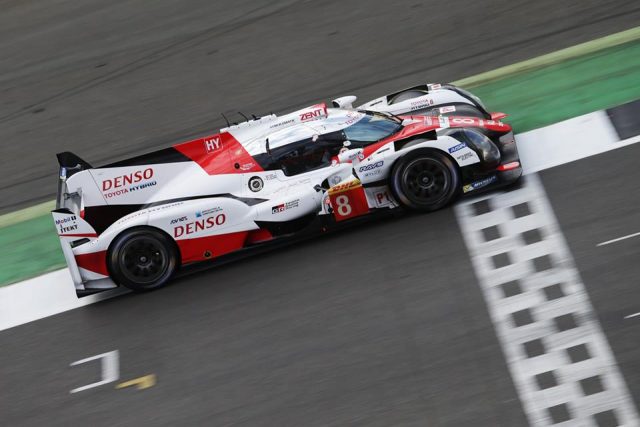 Toyota’s #8 entry has taken a hard-fought win in a 6 Hours of Silverstone marred by a crash for the sister #7 entry which saw Jose Maria Lopez hospitalised.

The Toyotas’ pace advantage over the LMP1 Porsches had been diminished by rain and two Safety Car periods, and the #2 Porsche jumped the #8 Toyota in the final pit stops by taking fuel only.

Trailing by over eight seconds with a half-hour remaining, Kazuki Nakajima ran down Kiwi Brendon Hartley to give the Japanese marque victory.

The #8 Toyota of Sebastien Buemi/Anthony Davidson/Nakajima ultimately beat the #2 Porsche of Earl Bamber/Timo Bernhard/Hartley by 6.2s, with the #1 Porsche third.

Despite crashing into the fence at Copse, the #7 Toyota of Mike Conway/Kamui Kobayashi/Lopez took the finish fourth in LMP1 and 23rd outright.

Lopez drove his car back to the pits after being pulled out of the gravel trap but was conveyed to hospital for precautionary measures.

The Argentine has since been released without injury, Toyota Gazoo Racing confirmed.

Australian Nick Foster was fourth in GTE Am, 23 laps off the class winner after the Porsche he shares with Ben Barker and Michael Wainwright suffered suspension problems. 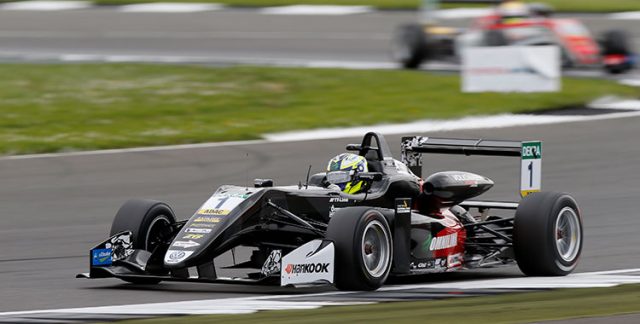 Joel Eriksson won Race 2 on his way to the round win in the F3 European Championship opener at Silverstone, while Australian Joey Mawson is seventh in the standings.

Lando Norris won Race 1, which started under Safety Car due to rain and was neutralised two more times due to incidents.

Mawson survived contact with Nikita Mazepin early in the race and held out Mick Schumacher between the latter two Safety Cars to take fifth.

In Race 2, the Swede Eriksson made the decisive pass on Callum Ilott on the opening lap, while Mawson finished one position outside the points in 11th.

Ilott turned the tables to win Race 3 over Eriksson, with Mawson in the thick of the battle as he finished eighth. 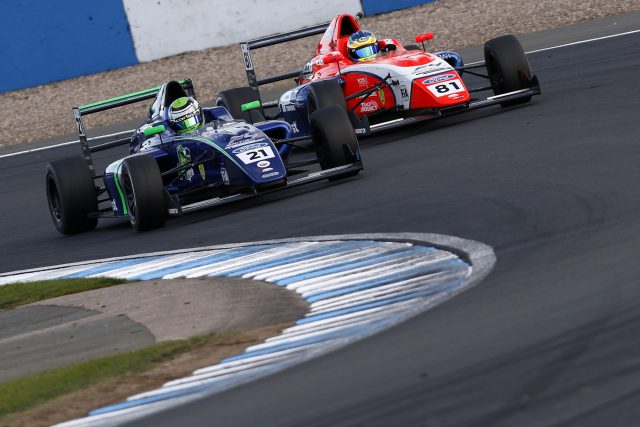 Oscar Piastri has fallen one position to third in the British F4 Championship after a pair of fifth placings in Round 2 at Donington.

Piastri was on track for pole before running off and finding the wall, instead qualifying third.

The 15-year-old Melburnian finished fifth in Race 1, holding out Patrik Pasma after dropping two positions on the opening lap.

Piastri looked on for a podium in the reverse grid race, having pressured third-placed Pasma for much of the way, but instead found himself passed by Harry Webb late in the piece.

Jamie Caroline won both races, the latter highlighted by amazing opening lap in which the Brit scythed from sixth to first.

Race 3 was red flagged and not restarted after a frightening crash which saw Billy Monger rear-end a slow-moving Pasma.

The championship continues at Thruxton from May 6-7. 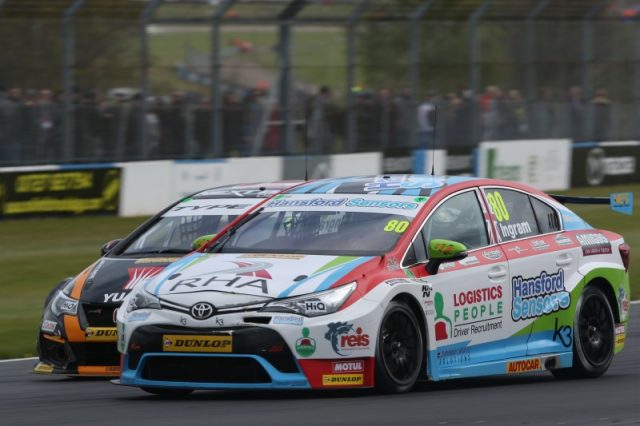 Tom Ingram leads the British Touring Car Championship after wins for he, Aiden Moffat, and Colin Turkington at Donington.

Moffat took a maiden race win in Race 1, the 20-year-old making up one position from fourth on the grid before passing Rob Austin at the Old Hairpin on Lap 2.

He took the lead off Ingram through the Craner Curves on Lap 5 and was untroubled thereafter as Matt Neal prevailed over Austin in an entertaining battle for the minors.

Ingram took second on Lap 3 before picking off Moffat, by this time struggling with maximum balance and fading tyres, on Lap 4, eventually beating Collard and Ashley Sutton home by 3.9s.

Turkington was awarded the Race 3 win after Gordon Shedden was excluded for a ride-height infringement.

Shedden had crossed the line first on a wet track, the race having initially been red flagged when several cars ran off in heavy rain. 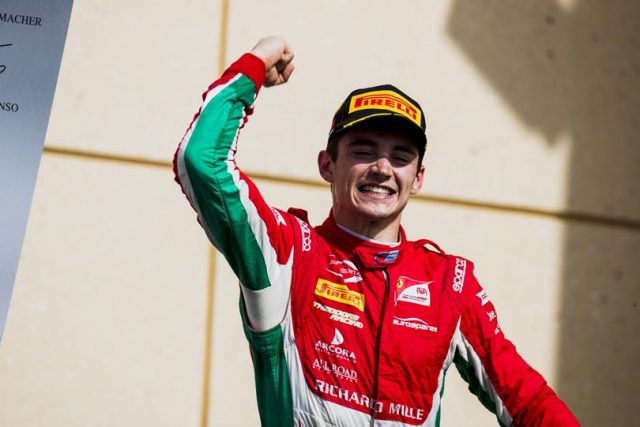 Charles Leclerc leads the Formula 2 Championship after winning the sprint race in Round 1 in Bahrain.

Artem Markelov came from behind to win the opening race.

The Russian ran a longer opening stint on his medium tyres before making use of newer soft rubber to take the lead off Frenchman Norman Nato on Lap 30 of 32, with Leclerc rounding out the podium.

Pit strategy was critical to Leclerc’s race win as the Monegasque made a non-compulsory tyre change in a sprint.

Leclerc took the lead off Italian Luca Ghiotto before extracting all of the life in his medium tyres as he amassed a nine-second lead.

The Ferrari junior driver pitted on Lap 15 and rejoined 14th, 24 seconds off the lead.

He then carved through the field, passing Brit Oliver Rowland at the start of the 23rd and final lap, before capitalising on an error from leader Ghiotto to take victory.

Ghiotto would hold onto second, ahead of Rowland. 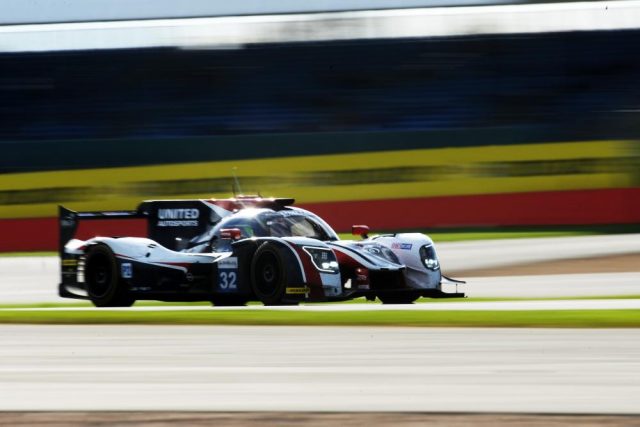 United Autosports took both outright/LMP2 and LMP3 victories in a 4 Hours of Silverstone race which was decided on the penultimate lap.

Filipe Albuquerque ran down Ryo Hirakawa, who had led by 30s during the final stint, as the Japanese driver struggled on worn tyres.

Australian James Allen finished fourth after team-mate Richard Bradley hauled the #40 Graff Oreca, also driven by Franck Matelli, from 28th on the grid to lead at the end of their first stint.

Ricky Capo was 10th in LMP3 in the #19 M.Racing Norma he shared with Erwin Creed and Yann Ehrlacher.

Enaan Ahmed swept the opening round of British F3 Championship, while Australian Harry Hayek leaves Oulton Park tenth in the points after being taken out in Race 2.

Hayek’s Race 2 was literally over before it started when he spun after contact with Sowery and was collected by Petru Florescu, causing a red flag.

With the race not restarted, Hayek was classified a non-starter.