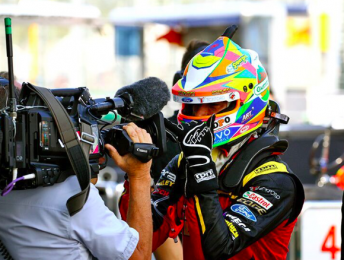 Chaz Mostert has thrown his support behind Supercars’ decision to mandate cockpit leg protection devices for drivers from the Wilson Security 500 in September.

The Supercars Commission announced last week that all cars would adopt additional leg protection within the cockpit in an attempt to avoid incidents like Mostert suffered at Bathurst in 2015.

Mostert crashed during qualifying for the Supercheap Bathurst 1000, breaking his leg after making contact with the gear lever.

At Symmons Plains, Nissan Motorsport’s Rick Kelly suffered a muscle tear in his left leg during the 12-car crash early on in the opening race two weekends ago. “We’ve seen some pretty big crashes over the last couple of years and the injuries still seem to be around the legs.

“I think it’s something that the crash at Bathurst inspired other teams to get on top of.

“It’s probably been delayed a bit while all the teams got on top of it, but it’s good.”

Other teams have begun modifying their chassis to accept the system, with Mobil 1 HSV Racing boss Adrian Burgess confirming to Speedcafe.com that his team has placed an order for their own systems.

Mostert though has encouraged Supercars to continue its push to improve driver safety, suggesting that while additional leg protection is a good start, the category can’t afford to be complacent.

“If there is another thing that happens in the future and there is something the category can do about it, it’s just got to get onto it a bit quicker.”

The new cockpit safety regulation will come into force at the Sandown 500 from September 15-17.