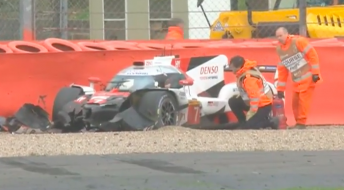 Lopez ploughed into the barriers at the high-speed Copse corner after losing control of the #7 Toyota TS050 Hybrid LMP1 on a wet kerb.

The Argentinian was able to drive the damaged car, he shares with Mike Conway and Kamui Kobayashi back to the pits, but has since been transferred to a hospital in Northampton for precautionary checks.

Lopez had been holding fourth position when the crash occurred.

UPDATE: Lopez has since been given the all-clear and has been released from hospital.